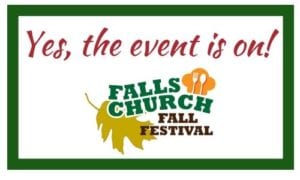 The massive Hurricane Florence, that latest projections show will make landfall south of this area in North Carolina but will bring extensive rain here, has caused the postponement of Friday night’s scheduled Athletic Boosters’ community tailgating party prior to George Mason High School’s football game. No official call was made as of press time on the game itself, as the Nelson County High School opponent has to make a 145-mile trek to get here.

But the City of Falls Church Recreation and Parks Department announced Wednesday that its Annual Fall Festival and Taste of Falls Church will take place as scheduled this Saturday, Sept. 15, from 10 a.m. – 4 p.m. in the Community Center parking lot at 223 Little Falls St.

The only change in plans is the elimination of the pony rides due to the saturated ground in the park.

The event will include other children’s amusements like moonbounces and a magician, live bands, booths for crafts, businesses, and civic organizations, a beer garden, and 16 restaurants competing for the title of “Best in Show.”

Entry is free, but cash is required for activities, beer garden, and food. More event information is available on the City’s website.

The Cherry Hill Park Playground Ribbon Cutting Ceremony is also on as scheduled at 9 a.m. The DMV2Go on Friday, the Farmer’s Market on Saturday, and the Library’s weekend events are on as scheduled. Flag football will take place as scheduled, but soccer is cancelled.

Since this area could still be inundated with rain, sandbags are available free of charge to City residents through Friday from 7 a.m. to 3 p.m. at Storage Yard A (between 215 and 217 Gordon Road, next to the Recycling Center). Proof of residency is required, and each household is limited to 20 bags. Bags must be returned when the threat of flooding is gone.

He said, “Though the worst effects are likely to hit further south, extreme winds and rain could do significant damage in our region. Gov. Northam has declared a state of emergency in Virginia and ordered evacuations in some coastal areas.

“The capital region faces an increased danger of flooding and power loss because significant rainfall has already saturated the soil, which may mean more downed trees and rapidly rising water. Low-lying areas and places near rivers and streams are at especially heightened risk of flooding.
“While we hope for the best, it is important to plan and prepare for the worst.”

Beyer added, “I am following the developments of the storm as it approaches the coast from the Capital Weather Gang. Their insights include predictions of rain and wind forecasts along with safety tips to cope with what may come. Whether you live in Alexandria, Arlington, Fairfax, or Falls Church, your local government is sharing details about its emergency response.

“I urge you to pay attention to their updates, and to follow any directives from local officials. I am also sharing some tips, resources, and emergency contact information. It is important to take precautions now, before the storm arrives.”

State Sen. Dick Saslaw, in his statement on the impending storm, stressed, “Above all else, make sure you have a safety plan that includes some basic staples like bottled water, candles and/or battery-powered flashlights. See that any prescriptions are filled and know how to store them in the event of a power outage.”

In Falls Church’s immediate neighbor, Supervisor John Foust representing the Dranesville District (McLean) of Fairfax County noted that Fairfax County will also be distributing sandbags at several locations, including at the McLean Government Center, 1737 Balls Hill Road in McLean, where residents will be able to claim 10 or 12 bags on Thursday and Friday until 7 p.m.

A Dranesville District Democratic Committee Fall Festival set for Saturday at the home of former Gov. Terry McAuliffe has been rescheduled to Sept. 23, and tonight’s scheduled VDOT public meeting has been cancelled.

In the City of Falls Church’s sandbag advisory, it was noted that those being distributed today and tomorrow will be available for homes not already being provided them.

City staff will help with loading the bags into a vehicle, but will not be responsible for any vehicle damage. Sandbags must be returned to the distribution site after the storm.

The City’s advisory states, “The use of sandbags is a simple, but effective way to prevent or reduce floodwater damage. Sandbags can act as a barrier to divert moving water around instead of through buildings. However, sandbag construction does not guarantee a watertight seal.

“The public is urged to remove any debris from the area where bags are to be placed; if tied bags are used, flatten them and flare the tied end. If untied bags are used, fold the open end to form a triangle; to form a sandbag wall, place bags tightly against one another to form the first layer of defense; place succeeding bags on the folded or flared portion of the previous bag and stamp into place to eliminate gaps and to form a tight seal, stagger the second and subsequent layers of bags, similar to the pattern of bricks on a wall; never use bags to build a fortress around your property because this approach can trap water between sandbag walls and structures, causing further damage; do not rely on sandbags alone to protect property, use baffle boards (plywood sheeting) or sheets of plastic tarp with sandbags.”