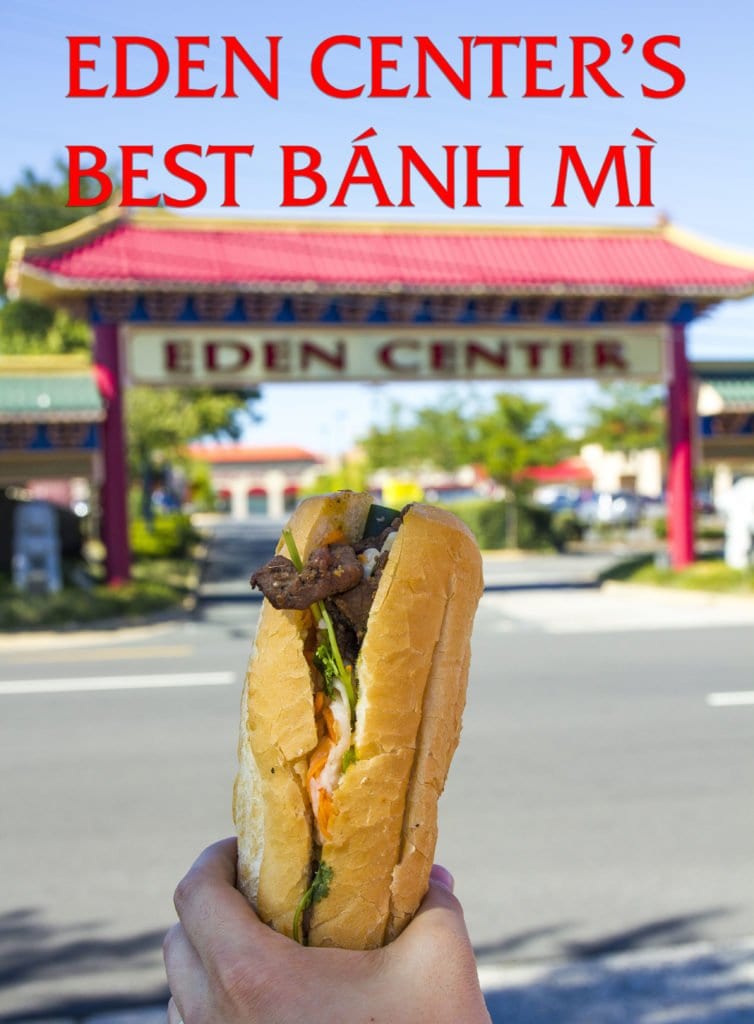 Eden Center, the 200,000 square-foot strip mall near Seven Corners, is a hustling, bustling mecca filled with food, shopping and all sorts of treasures. And while it’s actually within City limits, chances are it places a distant third when it comes to visits from City residents when compared to the farther out Mosaic District and Tysons. But while the Vietnamese shopping center may not be able to compete when it comes to name recognition, it runs circles around the other two on the tasty, little sandwich front. Yes, I’m talking about bánh mì. In fact, the Little City’s Eden Center is home to more bánh mì per square foot than just about anywhere else on the east coast.

There are eight shops in Eden Center that serve bánh mi, the simple-yet-flavor-packed sandwiches born of French colonialism in Indochina. Technically, bánh mì refers to just the bread, a special baguette resembling a mini loaf of French bread with a flaky, crusty outside and softer, pillowy inside, but now the term is most commonly used for the Vietnamese sandwich as a whole.

The types of bánh mì vary but most include some kind of meat, pickled daikon and carrots, cilantro, cucumber, hot peppers, a swipe of pate, butter and/or mayonnaise. The dặc biệt, or special combination, is a standard on every menu and made up of some mix of Vietnamese cold cuts like ham, headcheese (just about all the parts of a pig’s head: ears, tendons, skins, etc.) and pate. Don’t be put off by the sound of headcheese – it’s delicious. For the less adventurous, the xiu mai (Vietnamese meatballs) and xa xiu (barbecue pork) are two perfect starter sandwiches also found just about everywhere. And while most bánh mì include some type of pork, it can also be made with beef, fish, tofu, chicken and more.

With all the options at Eden Center, only two of the mall’s shops bake their own baguettes. Bánh Mi So 1 and Cha Kim Phung Bakery both make bánh mì in-house with So 1 also supplying baguettes to other Eden stores like Phu Quy Deli Delight and Phuoc Loc Deli. The rest of the delis and bakeries rely on daily delivery from outside suppliers.

In an effort to discover all the bánh mì Eden Center has to offer, I visited each of the center’s sandwich shops – multiple times – over the past month. During my run, I consumed copious amounts of headcheese, enough pate for at least 10 fancy dinner parties and surpassed way more than my daily recommended intake of carbs. (Fortunately, bánh mì is easy on the wallet with sandwiches ranging from $3-4 and most shops have deals if you buy five or more).

After my Eden Center tour, here are my favorite spots to chow down on bánh mi:

Huong Binh Bakery is unique in that it offers three types of bread for its bánh mì. With the choice of “roll,” “baguette” and “traditional,” I tried each and found the traditional to be the top pick and the most “bánh mì-like” of the three. Huong Binh makes one of Eden Center’s better combination bánh mì, or dặc biệt, filled with Vietnamese ham and headcheese and generously slathered with pate and housemade mayo. I wasn’t a big fan of the bánh mì ga with shredded chicken but did enjoy the grilled pork or bánh mì nem nướng. Though everything was fresh and crisp, they tend to over stuff the bread with garnishes here so be prepared to do a little topping maintenance before chowing down. (Of note, rather than long slices of cucumber, they use chips here which do stay in the sandwich better). As a bonus, each bánh mì comes with a small pepper wrapped along inside. I made the mistake of taking a bite of one before eating. Don’t do what I did.

Hidden inside the Eden Mall, Nhu Lan is, hands down, my favorite of all Eden’s bánh mi shops. I love it so much, I have trouble anointing one of its sandwiches as my favorite. The bánh mì xiu mai, with its housemade pork meatballs hit with a hint of sweetness and dressed up with sprigs of cilantro, daikon, carrots and jalapeno, is outstanding, as is the bánh mì nem filled with chunks of salty, pickled pork. The dark horse, however, is #5, the bánh mi bi with finely shredded strands of pork skin and meat. All of the sandwiches come with a healthy dose of what Nhu Lan calls its “secret butter,” a delicious housemade mayonnaise mixture cut with butter that soaks into the baguette and will leave you licking your fingers after the sandwich is gone.

Song Long is one of only two spots at the mall where you can actually sit down and eat bánh mì inside. Routinely busy around lunch and dinner times as crowds seek out its popular sandwiches and bubble teas, I found the best time to stop in is around 2 or 3 p.m. when the store is nearly empty. In addition to the rare instance of seating, Song Long is also the only place in Eden Center with bánh mì bò nướng xã, or lemongrass beef bánh mì. Packed into a roll brushed with melted butter along with pickled daikon, carrots, cilantro and hot peppers, the beef brings flavor not found in most other bánh mì and it’s my top pick from the menu here. I also really enjoyed the bánh mì heo nuong with grilled pork and, for the meat-free crowd, there’s the bánh mì chay with tofu skins.

While most bánh mi tend to be modestly meat-filled, I found Phu Quy’s portions a bit more generous. Another contender for best dặc biệt in Eden Center, the #1 combination was my favorite with tasty cold cuts paired with a good amount of pate and butter. The baguettes are supplied daily from Bánh Mi So 1 next door, so while the bread is always fresh, there is a chance they might run out (on one evening visit, I was informed they had exhausted their bread supply for the day). Also, with both indoor and outdoor seating, Phu Quy has the most seating of any of the bánh mì shops, though tables tend to fill up quickly, especially on weekends.

TO NOTE: Banh Ta, one of my favorite Eden Center spots for bánh mì, is currently undergoing renovations with plans to reopen as Little Viet Garden this October or November.