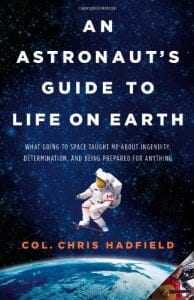 In 2013, astronaut extraordinaire Chris Hadfield lit the Internet – and world – on fire with his rendition of David Bowie’s “Space Oddity” while floating around the International Space Station. In addition to his in-orbit music video, Hadfield shared many spectacular photos and videos from his time in space.

Next week, the Canadian space traveler will be in town promoting his book An Astronaut’s Guide to Life on Earth. On Thursday, April 24, Hadfield will be at Barnes and Noble in Tysons for a discussion and book signing and on Friday, he’ll be at the National Air and Space Museum in Washington, D.C.

What: Chris Hadfield at Barnes and Noble & Air & Space Museum