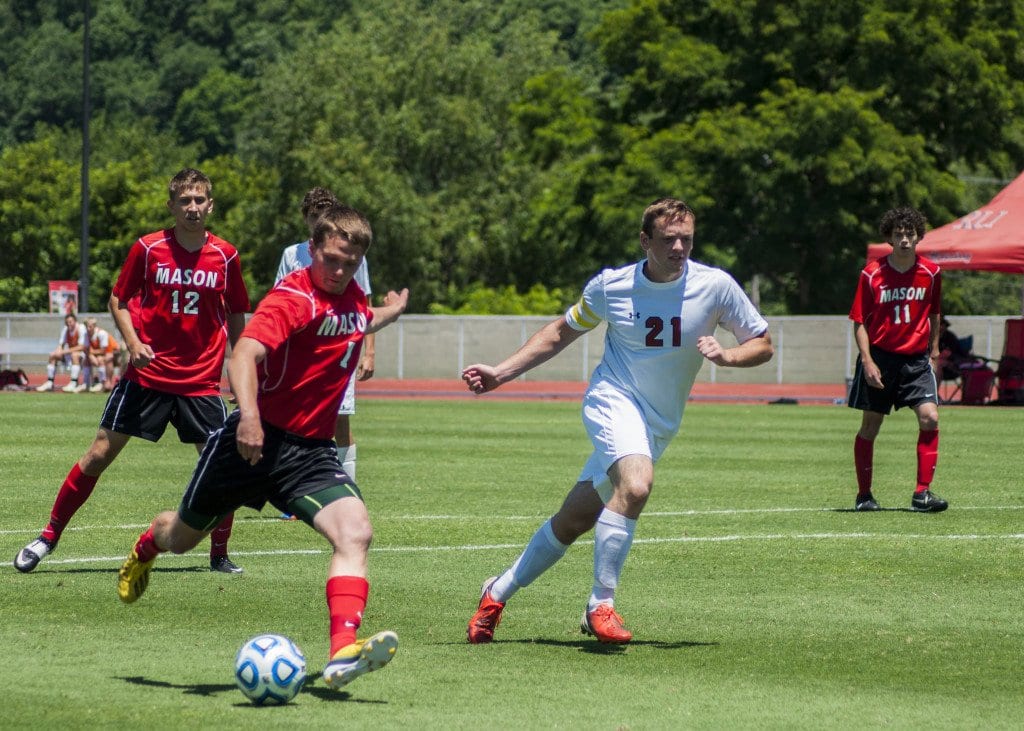 In one instance, Riverheads sophomore forward James Kasak lobbed a ball from about 30 feet out with less than three minutes in the period that nearly floated under the crossbar. But George Mason junior goalkeeper Daniel Donovan punched the ball over the crossbar for the save. Donovan had two other saves during the match – both of which were during the 0-0 first half.

“[Kasak] is probably the best player we’ve seen all year. He can really rip it from anywhere on the field, so I was trying to stay on my toes the whole game,” Donovan said. “Then he just ripped one and I was playing it safe, so I just hit it over the goal. [I’m] not trying to catch it in the middle of the state championship game.”

The game turned in George Mason’s favor in the 47th minute when Riverheads freshman midfielder Rinaldo Martina committed a handball penalty in the goal box while defending a header by George Mason senior midfielder Paul Darmstadter during a corner kick. Martina was issued a red card and ejected from the game, leaving the Gladiators a man down. Darmstadter scored the first goal of the game during the ensuing penalty kick.

“Mistakes are going to be made in the game,” said Riverheads Head Coach Mark Husband. “But I can accept something when somebody is playing hard. They’re working out with their teammates, they’re trying to do the best that they can – we’ll accept that as long as they’re giving 100 percent.”

That goal galvanized Riverheads fans, who were screaming for their team to close the 3-1 margin with the match winding down. But sophomore forward Elliot Mercado drove a header into the goal in the 77th minute to seal the Mustangs’ victory.

The Mustangs beat James River High School 11-0 last Friday to advance to the championship match against Riverheads. Lawal and Mercado led the Mustangs in scoring with three goals each in the match, followed by junior defender Patrick Pereddo with two goals. Darmstadter, senior midfielder Sinan Kokuuslu, and freshman midfielder Olo Sembera each added a goal to the Mustangs’ tally.

The Mustangs outscored their opponents 155-13 while only losing one match during their 2014 campaign.

“It’s been an amazing season,” said George Mason Head Coach Frank Spinello. “We’ve assembled a huge amount of talent. I mean, our guys are very talented, but sometimes talent doesn’t translate to winning championships. It takes a lot of chemistry, and this team just had chemistry from the beginning of the season and have just done a great job.”