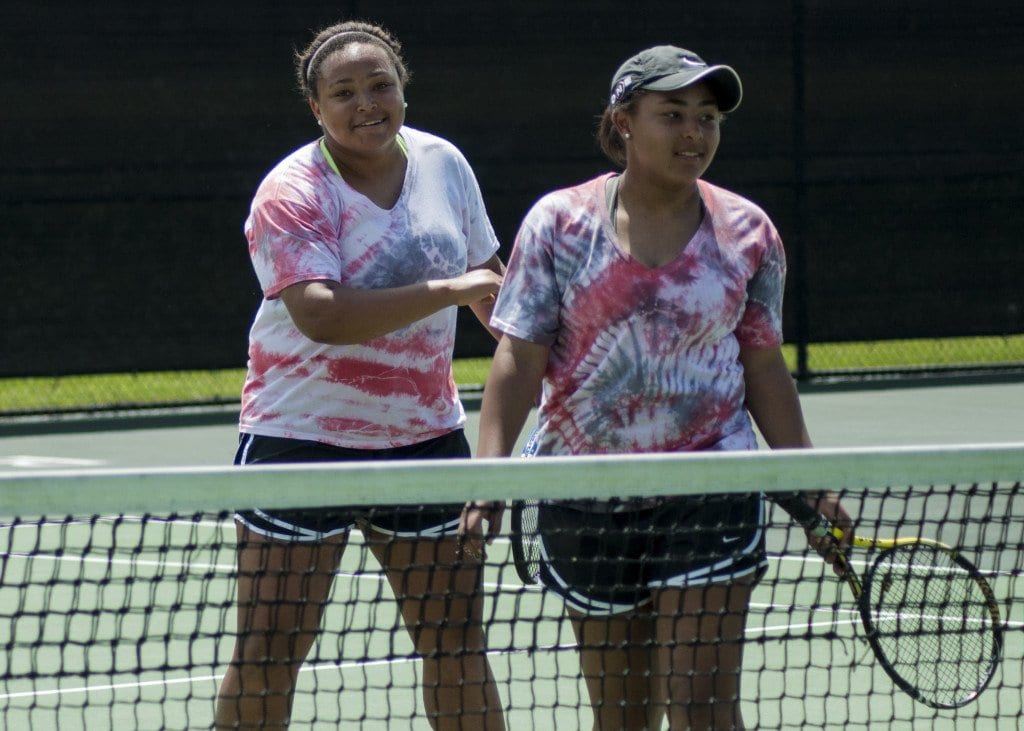 “Both teams were on point the entire time,” Ferreira said. “Rooting for Mason was pretty stressful as a coach, but I definitely applaud Gate City for working so hard and putting their best effort forward.”

“I push Emily a lot, because she’s my sister and if I was out there with anyone else I probably wouldn’t push anyone as hard as that,” Rosa Smith said. “But she’s my sister so I try to push her, but when we were down I just tried to tell her ‘you can do this.’”

The Smiths, who had about 30 Gate City supporters in the stands, grasped the momentum with their second set comeback and victory. But the Mauneys came on strong in the third set and won the first two games. The Smiths won the next two games and then both teams started winning a game each until they were tied 6-6 – forcing a tiebreaker set to determine the victor.

The Mauneys and the Smiths continued to take the lead from one another during the tiebreaker set until the Mauneys tied the match at six points apiece. Kynadi Mauney had the serve, and she and Carrington took a chance to huddle while retrieving a ball that had rolled to the back of the court.

“Basically, we went back there [and] we just took a second to pause and just regroup ourselves from the fast-paced movement of the point,” Kynadi said. “And we just told ourselves ‘this is it.’ We can’t keep letting these crucial points go. We just relaxed and said ‘we’re not letting this go’ and we just went for it.”

The Mauneys won the next two points, the last of which was awarded when the Smiths’ return landed out of bounds in the back of the court, and took home the doubles title. Kynadi Mauney said she thought her sister Carrington had extra motivation to help their team get the win after watching Kynadi lose the singles championship to Rosa Smith the day before.

Rosa Smith beat Kynadi Mauney 6-1, 5-7, 6-4 last Thursday to take home the VHSL single state championship. After losing big in the first set, Kynadi Mauney was down 5-3 in the second set when she mounted a comeback and won four straight games to steal the set.

Rosa Smith and Kynadi Mauney faced each other last Monday as well, when Kynadi beat Rosa 6-5, 6-2 during George Mason’s team tennis 5-2 loss to Gate City. Rosa said Kynadi played really well in their rematch on Thursday. It was Rosa’s third trip to the singles state finals – she lost her first two state finals matches in 2012 and 2013.