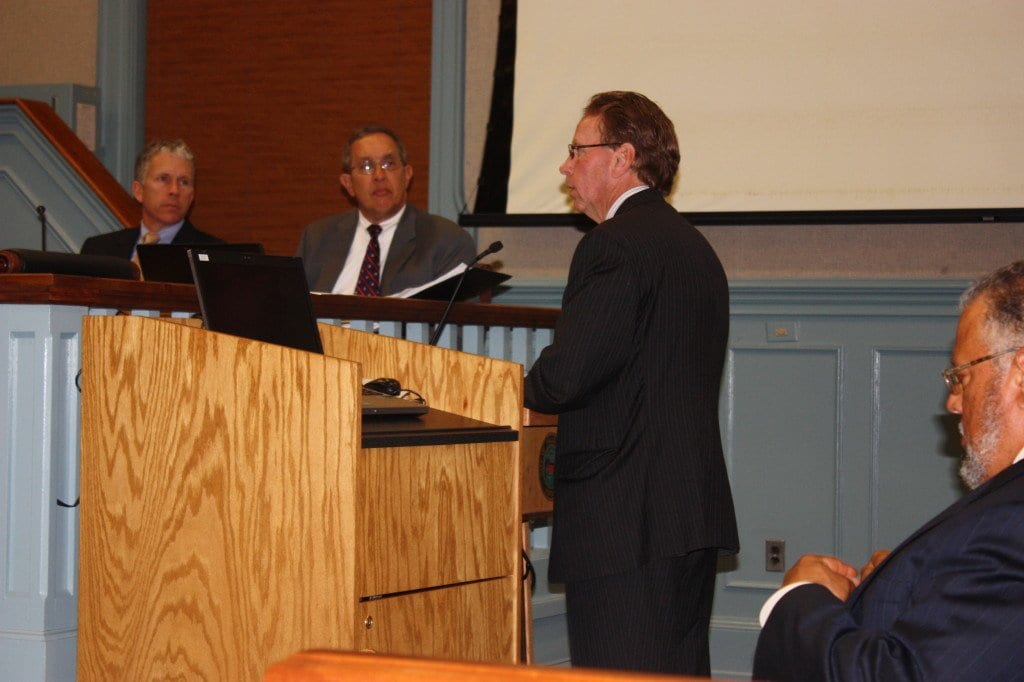 The long-sought, hard-fought effort by developers to win approval for an 83-unit, five story assisted living project with ground floor retail won its final OK from the Falls Church City Council Tuesday night, although by a narrow 4-3 margin.

Ed Novak of Nova-Habitat, the developer who played a central role in kick-starting the wave of mixed-use development projects 13 years ago in Falls Church, achieved the approval through a deft and unprecedented set of negotiated proffers to the City.

Most significant was a real estate tax payment schedule that will be significantly higher than what would be expected of an assisted living project to make the three-quarters of an acre project, to be known as the Kensington, one of the highest-yielding commercial properties in the City.

In the dramatic final comments and voting, following remarks affirming the project by Duncan, Sze and Connelly, it was when Snyder tipped his hand in favor that the matter was decided.

He said he credited an endorsement of the project from the Falls Church Chamber of Commerce that came in earlier that day with having a decisive role in his decision. He said the Chamber’s statement reflected how “small businesses live and breathe” the stuff of the positives associated with the project.

He thanked the efforts of opponents to the project for “helping to make it stronger” by eliciting changes and improvements.

Among the elements most improved through the 13-month long process of winning final approval was the architecture of the building.

Great efforts were also made to conform parking at the site with the City’s “transportation demand management” model,” as explained by City Planner Paul Stoddard, to relieve concerns of many neighbors to the site that it would overburden the neighborhood with on-street parking.

City Economic Development chief Rick Goff also confirmed the economic benefits, noting the proffer called for the project to be taxed at an average of the 10 highest taxed commercial interests in the City each year, instead of at the level of a formal City tax assessment.

Of the “no” votes on the Council, Oliver and Mayor Tarter objected mostly to having that “use” go into that location, which is central to the area that has developed the most in the last decade.

However, others like Council member Connelly said, “As someone who works right in that area, I can tell you it is going to bring a lot of vibrancy.”

Duncan conceded that “vibrancy is in the eye of the beholder,” and as to those who’ve questioned his motives, he said in a moment of levity that the spelling of his name is “Duncan,” not “Dunkin’” as per the fact that a letter of intent from Dunkin’ Donuts has been received about locating at the site.

Councilman Sze said the project meets the criteria of an appropriate use with economic good sense.

It was also noted that if not approved tonight, the property would revert to the hands of the owner of the Burger King, who likely commit to at least 10 more years to the site.