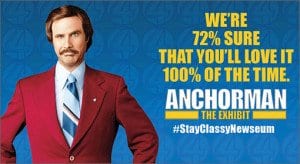 November 14 is kind of a big deal. Next Thursday, the Newseum pulls back the curtain on “Anchorman: The Exhibit,” a display featuring props, costumes and footage from the Will Ferrell classic, “Anchorman: The Legend of Rob Burgundy.”

The exhibit will include costumes worn by the Channel 4 Evening News team, props including Sex Panther cologne and Ron’s sweet jazz flute and a recreation of the KVWN-TV anchor desk and news set. In addition, visitors can pose for photos at the desk and get the chance to jump in front of the camera for an Anchorman-themed TV spot.

What: “Anchorman: The Exhibit” at the Newseum