Hoisting friends up above your head to the tune of an ’80s pop song and playing a game of ping-pong that isn’t as it seems might not be typical pageant-winning talents, but they were just right for Mr. and Ms. Mason. The annual pageant at George Mason High School is about entertaining above all else, and with their fun and comical talents, seniors Cal Hannan and Kelly Ready won the Mr. and Ms. Mason titles this year. With the honors come special roles in the Memorial Day parade: King and Queen. Cal and Kelly talked to the News-Press about the pageant and their time at Mason, and looked ahead to the Memorial Day parade and their post-graduation plans. 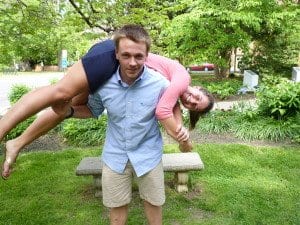 How did you win your Mr. and Ms. Mason titles?

Kelly: He literally picked people up. It was pretty awesome. No one had ever done that talent before.

Cal: That was the goal.

Kelly: I did Matrix ping-pong. It was really dark on the stage, except for a spotlight on the ping-pong table. Me and my step-brother [Tim Donis], he was in the contest as well, had these huge sweatpants and we had people with their arms in the legs of the sweatpants, so they were moving our legs and we were moving our arms while playing ping-pong with each other. The ping-pong ball was attached to the end of a rod, so the movement was really exaggerated across the stage.

What do you think the Mr. and Ms. Mason titles convey?

Cal: It’s sort of a popularity contest, but I think the idea is to see who can be a good entertainer on stage, have a good stage presence, and do the most unexpected and absurd things.

Kelly: It’s about being goofy, having a good time, and trying to make the audience laugh. It’s fun to see everyone outside of their normal school personality do something crazy and unexpected.

How do you feel about being the King and Queen of the Memorial Day Parade, and did you know that honor came with winning Mr. and Ms. Mason?

Kelly: I had no idea. It’s pretty exciting because I’ve seen the parade for several years, ever since I was a little kid.

Cal: I didn’t think I would win at all going in, or even up until the announcements. Being in the parade was probably the last thing on my mind.

Kelly: Everyone was pretty unprepared for the show.

Cal: I was the most unprepared and I won.

Kelly: I practiced the day of.

Cal: I changed my act after I practiced the day of.

What are your parade plans?

Kelly: Throwing out lots of candy.

What are your favorite parts of the Memorial Day Parade and Festival? 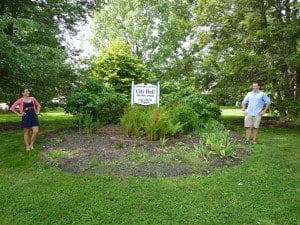 Cal: I like the fun run. I normally do that. I’ll probably still get to do that this year. I live right in the middle of it, so I can’t really get away from it, and it’s cool to see the people walking around all day.

Kelly: I like the fun run, too. Having everyone out in the streets running and having the roads blocked off is really nice. The spirit is generally exciting, and everyone’s in a good mood. It’s a good place to be.

Why should Falls Church come out to the parade and festival?

Kelly: It’s a Falls Church tradition. It’s definitely the best day of the year in Falls Church. I think it’s Falls Church at its best. You have all the vendors, and the music, and the fun run. There’s just so much going on that there’s no reason not to be there.

Cal: It’s nice to see everybody out and walking on the street, and seeing all your friends and everybody concentrated in the same area.

What activities are you involved in at Mason?

Cal: I played four years of basketball, a year of track, and a year of football – sort of, I got hurt. Then I’m also in a couple bands at school.

Kelly: I run cross country and play lacrosse, and I’ve done that for all five years – eighth grade through 12th grade. I’m also involved in some clubs, like Mustang Ambassadors [a welcoming program that offers guidance from upperclassmen to incoming eighth-grade students] and I’m the vice president of NHS [National Honor Society].

What have been your favorite classes at Mason?

Cal: I think IB music is probably my favorite. I have a love-hate relationship with it, but I think overall it’s been really rewarding and I’ll look back on it more fondly than negatively even though it has been very stressful at times. It’s a two-year course for the IB diploma, and the first year is music theory and the second year is composition. I think it’s an opportunity that not a lot of kids, at least in the U.S., have in music to look at theory and composition.

Kelly: I have a lot of favorite classes, but I really enjoy anthropology with Mr. [Jamie] Scharff. It’s really interesting. I’ve never really explored that field before, but he shows us some interesting films about different cultures. In general, I’ve enjoyed history a lot but that’s kind of one of my passions.

What are your plans after graduation?

What will you study?

Cal: Probably something science-related – I think physics and music, or transferring to the engineering school.

Kelly: I’m undecided, but I’m thinking maybe international relations or something with language. I’m not sure yet.

What are your favorite Mason memories?

Kelly: We did a Harlem Shake dance [based on the viral video phenomenon] in the Senior Courtyard earlier this year that was fun. We did our own version of it with trash cans, motorcycle helmets, and crazy outfits, and that was really fun.

Cal: All the JV shows have been stand-outs. I played in the pit orchestra for “Xanadu” this year, which was different for me. It turned out to be a lot of fun being in a parody ’80s rock group. And Mr. Mason was a lot of fun – not because I won, but because I liked seeing everyone’s act and seeing people not take themselves as seriously.

What advice would you give to next year’s aspiring Mr. and Ms. Mason?

Kelly: Just have fun with it. There’s really no need to stress about it. If you can get some friends to be involved in your act and come up with something funny and entertaining, that’s the best way to go.

Cal: I read the interview from last year [in the News-Press, with 2012 Mr. and Ms. Mason Matt Abel and Claire Constance] and both Matt and Claire said their advice was to not prepare and to not think about it, and just do it. That worked for me. I’d say prepare even less than I did.

Kelly: Don’t even practice once.

Cal: Negative-prepare. Don’t even think about it until the night of.

Cal: Maybe, if that.

What message would you like to send, as King and Queen, to your subjects?

Kelly: Live in the present.