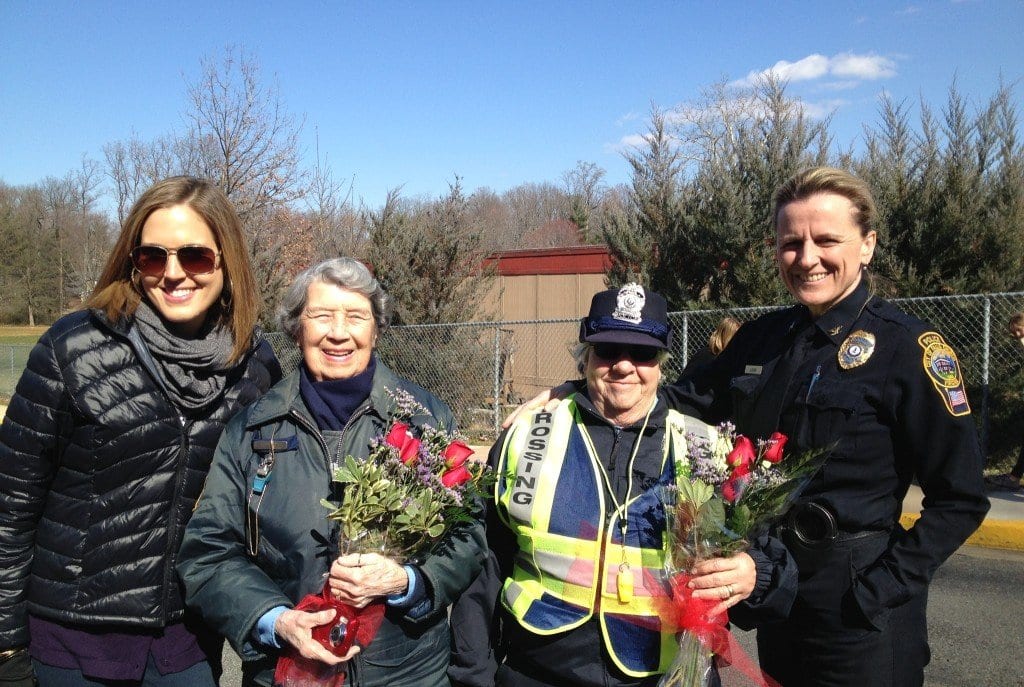 Audrey Luthman and Janet Haines, with 88 years combined service as school crossing guards in the City of Falls Chuch, are modest when discussing their upcoming honor as co-grand marshals of the City’s 2013 Memorial Day Parade. It will certainly be a change from their normal Memorial Day routine. Any other year, Luthman and Haines would be performing their crossing guard duties at the bustling parade and festival.

When asked how they feel about being the grand marshals, Haines says, “We’d rather be working.” Luthman nods along, adding, “bunch of old ladies sitting up in a convertible,” between laughs.

The rewards of their work come not in honorary titles, but in hugs from the children they keep safe and thanks from the parents who appreciate their work. They’ve also enjoyed watching the children they’ve looked out for grow over their long careers as crossing guards – Haines with 46 years on the job and Luthman with 42.

“When you’ve been working so long, you’ll see them taking the bottle in the carriage, up until they’re married and they bring their kids back,” Luthman said. “That makes you feel like you’ve really accomplished something.”

Haines is in charge of the crossing at St. James School, helping a handful of students cross Spring and Broad streets. The task is made easier by the pedestrian lights installed at the busy Falls Church thoroughfare, she says, and the fact that her children are well behaved. She sees relatively few children these days; most are carpooled to and from school, but she expects a few regular walkers and walks from corner to corner with them to make sure they wait for the light and cross safely.

Luthman is posted at George Mason High School, and then makes her way to Thomas Jefferson Elementary School to help the younger students. Standing squarely in the three-way intersection of S. Oak Street and Parker Avenue, she controls the movement of cars, buses, and students with turns and waves of her hand. The task can be challenging when school first starts and students and parents alike are getting used to a new routine, she says.

“You’ve got to train them,” Luthman said. “And I’ve got them trained.”

Luthman and Haines enjoy the work, but both joke about their inauspicious starts as crossing guards. Haines was looking for part-time work when she heard that the crossing guard at St. James was leaving her post. Haines was hired, and told that she could stay on if the old uniform fit. Audrey Luthman’s sister, who was working at City Hall, asked Audrey if she could temporarily serve as a crossing guard. Luthman quips that she’s still subbing all these years later.

Throughout their long service as crossing guards, they’ve helped countless students safely go to and from school. They’re tasked with keeping children safe and maintaining order on hectic roadways, even if the rain is pouring down, the sun is scorching, or there’s snow on the ground. But both agree that as long as they’re well enough to do it, they’ll continue to serve the City as crossing guards.

“We enjoy every minute of what we’re doing,” Luthman said. “We see some scary things, and then other times we see some happy things,” Haines added. “It all works out for the best.”