The Taste of Falls Church, the Halloween Carnival, the Easter Egg Hunt – if it’s a special event put on by the City of Falls Church, then Jenny Paxton is in charge. The senior program supervisor has overseen the City’s community-wide celebrations for the past seven years, and this Monday she and the Recreation and Parks Department staff will be running one of the City’s biggest events of the year: The Memorial Day Parade and Festival.

Paxton’s typical Memorial Day starts at 5 a.m., when she and the maintenance crew start setting up for the expansive festival. Then dozens of vendors arrive to take their places around City Hall, and she and the event staff help them to find their spaces as they pack the streets with their gear. The Don Beyer Volvo 3K Fun Run comes next, followed by an enormous scramble for the treasured Fun Run T-shirts. Set-up for the Veterans Ceremony starts soon after. 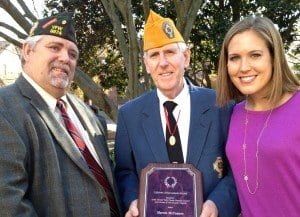 At the Veterans Ceremony, Paxton takes a moment to reflect on the meaning of Memorial Day, and why she and several staff members and volunteers are doing the hard work. She takes a bit of time to grab lunch – the namesake dish from Sherri’s Crab Cakes, her favorite Memorial Day treat – before she’s off to the main stage to prepare for the parade and help the judges tabulate their scores as the floats, cars, and performers pass through. She expects a nearly 14-hour workday but it goes quickly, she says, and she finds it rewarding.

So much could go wrong with an event that has such a high turnout, at nearly 10,000 people, and so many moving parts – including a 60+ entry parade as a component that Paxton says is “almost like a special event within a special event.” The event has been spared any major catastrophe, but there have been a few tricky situations Paxton has had to navigate.

One year, Paxton recalled, the car dealership that had promised to loan a convertible for the parade’s king and queen claimed not to be aware of the arrangement when pick-up time came, just moments before the parade was set to step off. Luckily Don Beyer Automotive Group, which annually provides the grand marshal’s ride, was able to send a second car for the parade.

Just last year, Paxton met with complications while securing an announcer for the parade. Perennial announcer and former WUSA9 newscaster Gary Reals had planned to be out of town for that year’s festival. Paxton knew far in advance and found a replacement. But that replacement had a medical emergency the Saturday before the event. A second replacement was found when Recreation and Parks Advisory Board Chair Charles O’Hara agreed to be the voice of the parade, and this year Reals will return to his regular spot behind the microphone. 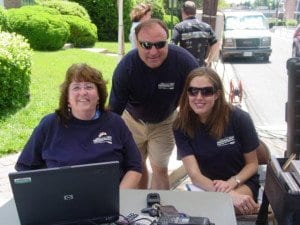 The sweltering summer heat that’s normally expected on Memorial Day also presents challenges that Paxton must deal with each year. With parade participants sitting outside for long stretches of time – some in heavy costumes, and some dancing or engaged in other strenuous activities along the route – heat exhaustion is a serious concern. Paxton says that to prevent hospital transports for heat-related maladies, parade participants are advised to dress lightly if they can. Buses at the end of the parade route operate as cooling stations and provide first-aid and water to those in need. Sometimes the local fire department will bring out the hoses and open a hydrant to offer immediate relief from the heat.

Paxton says the Memorial Day Parade and Festival encompasses more of the community than all of the City’s special events. Many City departments and staff members work to make the event possible. A plethora of local businesses and community organizations are represented at the festival. City residents attend the festival year after year and make it a Falls Church tradition, now in its 32nd year. And for Paxton, that’s part of the joy of planning special events in the City of Falls Church.

“This has been great and a lot of fun working here and seeing a community that really gets into their special events,” Paxton said. “I might be the organizer, but it’s a whole community working on these events.”