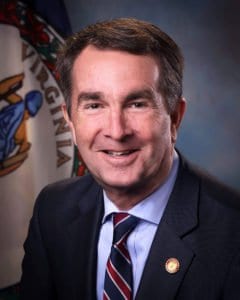 In a letter to President Trump today, Virginia Governor Ralph Northam urged action to end the federal government shutdown that commenced at midnight last night. Here is the text of the governor’s letter:

I write today urging you to work with Republican and Democratic leaders in Congress to take immediate action and end the current partial government shutdown. A shutdown of any kind negatively impacts Virginia’s economy and inflicts real harm on federal workers and contractors throughout the Commonwealth.

Virginia is home to over 130,000 federal workers, many of whom work for agencies and departments affected by the current shutdown. As multiple studies have shown, Virginia – along with its neighbors in Maryland and the District of Columbia – is disproportionately impacted by any disruption in the normal operations of the federal government. During the 16-day government shutdown in 2013, federal workers and contractors in the Washington, D.C., metropolitan area lost $217 million per day in wages. While most furloughed employees received their pay retroactively, federal workers are not guaranteed their wages following a shutdown. Even if they receive their pay retroactively, federal employees have to cover expenses – like mortgage payments, utility bills, and tuition charges – while not receiving their paychecks.

This challenge becomes even more difficult during the holiday season, when families face additional costs incurred by travel, gift-giving, and other responsibilities.

Again, I urge you to fully consider the impact that a shutdown has on the lives of Virginians and others around the country. Please work to end this shutdown.