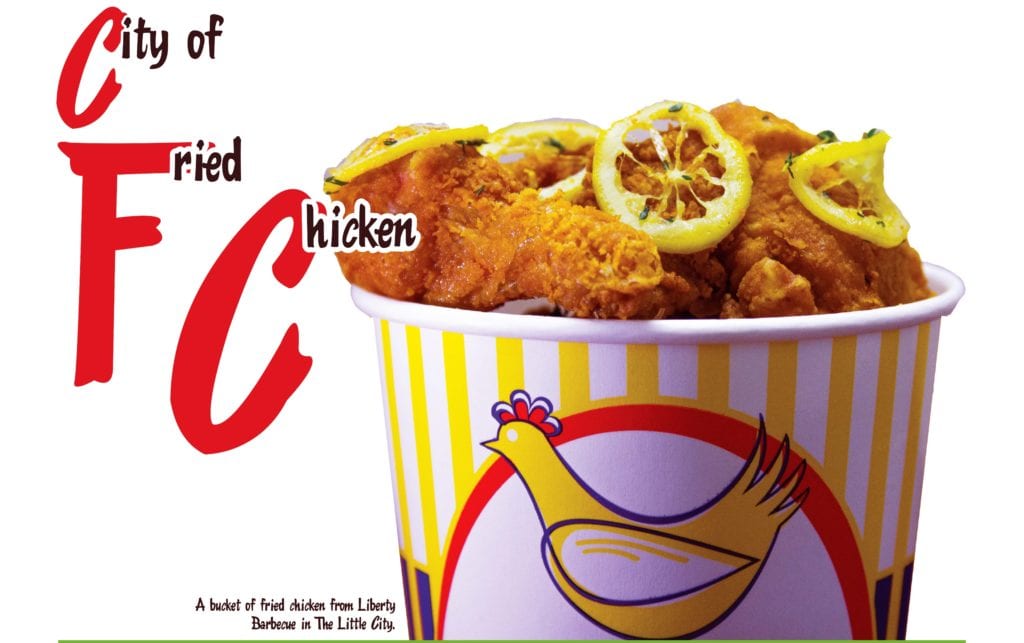 Along with the recent Little City Restaurant Revolution, there’s been a bit of a Falls Church fried chicken revolution as well. It all started with Astro Doughnuts & Fried Chicken’s expansion to Pimmit Hills in 2015, followed a year later by the debut of a Harris Teeter flagship store in the middle of the Little City serving all-day fried chicken. Then last year, two more destinations entered the game when Korean fried chicken favorite BB.Q Chicken opened across from George Mason High School in August and Liberty Barbecue brought its pickle-brined chicken to the former Famous Dave’s space in December. Along with the chain gang – KFC, Popeyes and Pollo Campero — that’s a lot of fried chicken.

So, in service to the chicken-eating public, we went on a fact-finding mission to all of the above and conducted a totally unscientific study to find out just which bird is the best. 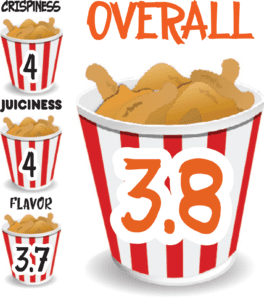 Astro Doughnuts and Fried Chicken is one of two restaurants in our roundup where the bird shares the spotlight on the menu. But even though doughnuts get top billing at this Pimmit Hills joint, the chicken more than holds its own.

Astro co-founder Elliot Spaisman says they went through many different versions and tweaks when deciding upon the final recipe and in the end, a 24-hour brining process using buttermilk and high-quality flour made for one of the juiciest bites of meat we had out of the whole lot. Tasters called it “really” and “solidly” juicy and praised the flavor as “nice” and “above the bar.”

Notes on crispiness were more varied however with one taster giving it top scores for crunch but another calling it “not very crunchy at all.” 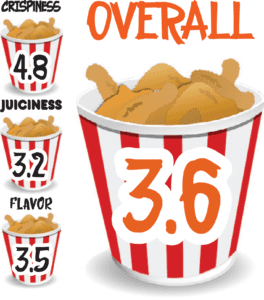 Thanks to two trips to the deep fryer, Korean fried chicken is known for its crunch, so it’s no wonder BB.Q Chicken earned closed-to-top marks for crispiness. In addition to its double dip, the fried chicken is prepared using olive oil which BB.Q’s Ryan Ham says make a big difference in health and taste.

While all agreed on the top-notch crispiness, BB.Q’s Golden Olive fried chicken was the most polarizing of the bunch when it came to flavor. Several tasters thought it was “bland” and “boring” while others lauded the flavor as “standout,” highlighted by a touch of “sweet” acting as a “great compliment to the saltiness.” 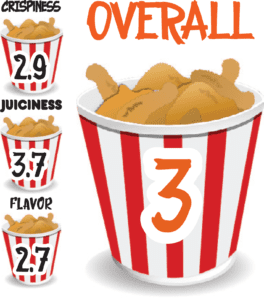 Harris Teeter’s chicken is just about the definition of fried chicken mediocrity. Featuring pieces double-breaded by hand, the chicken is prepared fresh in-store every four hours or as needed, with two options available: via pre-made buckets or straight from the hot bar. We found the quality varied depending on the source, with the hot bar, by far, the better choice (the lids create a bird sauna in the bucket, turning the once-crisp skin soggy).
Tasters found the flavor average through and through, calling it “just OK,” “good but nothing unique” and “not outstanding.”

The best thing going for Harris Teeter fried chicken is the price. Buckets are $7.99 each for about one-and-a-half pounds of chicken (hot bar is pricier at $8.99/pound) and on Friday, buckets are just five bucks. 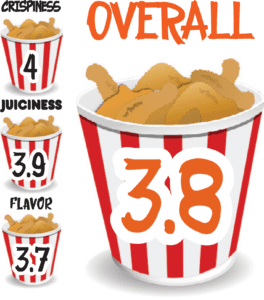 It’s been several years since the Colonel packed up his secret blend of 11 herbs and spices and moved out of Falls Church proper. However, just outside City limits in Baileys Crossroads, red-and-white buckets of fried chicken are churning out of the KFC on Columbia Pike — and there’s a drive-thru to boot.

While Colonel Sanders has the most storied and pedigreed chicken of the bunch, tasters found inconsistency prevented KFC from scoring higher. Comments like “nothing remarkable,” “kinda boring” and “decent” were noted though one also called it “the best yet.” It was also commented that “extra crispy was less flavorful than the original recipe.” Tasters’ praise of the chicken having “a nice crunch” and being “crispy” was juxtaposed against others who called it “nowhere close to the crispiest I’ve had” and “soggy.” 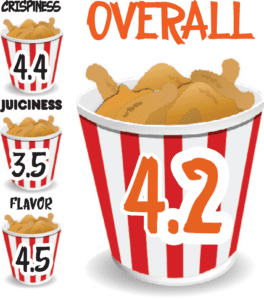 While most come through the door for smoked meats, Liberty Barbecue’s fried chicken can rival both the ribs and brisket on the menu. Created and refined at Liberty Tavern in Clarendon, chef Matt Hill says they tweaked the recipe a bit before bringing the bird to Falls Church. After a 36-hour pickle brine and a buttermilk marinade, the chicken then gets pressure fried before coming to the table dressed with lemon slices and thyme, with a cup of hot honey on the side.

All the prep and recipe honing paid off, as Liberty’s chicken scored top marks for flavor, with tasters calling it “so good” and touting it as leaving a “lasting impression.” Crispiness fared well, too, earning praise as “excellent” and “solid,” while juiciness was a bit more varied, getting called “good but not great” but also “on another level.” 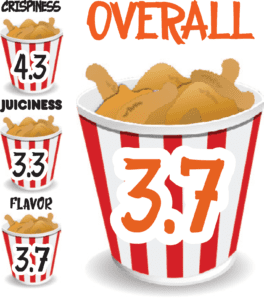 Founded in Guatemala in 1971, Pollo Campero is hugely popular in Central America and has acquired a dedicated following at its 70+ locations in the U.S. It has been churning out the chicken in Falls Church since 2003 with a concept similar to a Popeyes or KFC with fried chicken meals paired with an assortment of sides, though here it’s yuca and street corn rather than mashed potatoes and mac ‘n’ cheese.

The Central American recipe was a hit with some who enjoyed a “hint of citrus” and “unique flavor” from the breading but others thought it “needed more flavor.”

The skin was a high point, too, with both options — traditional and extra crispy — scoring well with tasters. 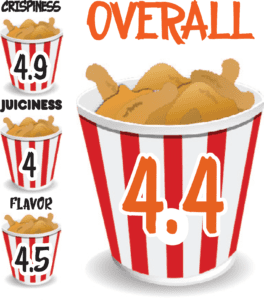 It turns out, “Love that Chicken at Popeyes” is a pretty accurate tagline for the 36-year-old Louisiana fried chicken chain as the fast food stalwart cleaned up in our ratings, earning top marks in all three categories.

Thanks to its 12-hour marination in “Louisiana seasonings,” the group gobbled up both mild and spicy flavors and earned remarks like “perfect” and “my favorite.” With its tell-tale flaky skin, Popeyes even outcrunched the double-fried Korean chicken, earning a near-perfect (4.9) score for crispiness.

The only minor quibble was from one taster who commented “one bite could have been a little more juicy.”