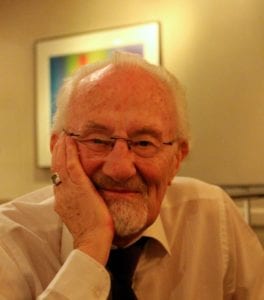 Born in Plentywood, Montana to Dewey and Alice Hjort, Howard Hjort’s childhood was spent on a grain and livestock farm alongside siblings Richard, Doug and Judy. After a stint in the U.S. Army, Howard was hired as a student trainee by the U.S. Department of Agriculture (USDA) during his first year at Montana State University. He proved to be an asset, and USDA chose to fund his Master’s and Ph.D. coursework in agricultural economics. Howard began his career in Washington, D.C. as a staff economist, where he worked intermittently until 1981, gaining recognition from the Carter administration for his significant strides in agricultural analysis, planning and evaluation. At the onset of what would prove to be a lifelong effort towards global community outreach, Howard set out for New Delhi with five kids in tow, to assist the Ford Foundation in implementing India’s family planning program. Trading the badminton net for a volleyball net, Howard then moved to Rome in 1984 to lead the Policy Analysis Division of the Food and Agriculture Organization of the United Nations (FAO). From 1992-97, Howard served as Deputy Director-General for FAO, during which he welcomed the birth of his sixth child and brought together colleagues, friends and family for weekly volleyball gatherings featuring an abundance of food, wine and hospitality. At the conclusion of his service to FAO, former Director-General Jacques Diouf said, “For his efficiency, for his loyalty and for the services he rendered to this Organization, I would like again to express my great admiration, appreciation and thanks to him. I pay my greatest compliment to this distinguished international civil servant.” Indeed, Howard never strayed from his duty as a civil servant, and continued working with FAO as a consultant, researching issues such as food security, nutrition, and worldwide access to clean water. It was during a consultancy in Israeli-occupied territories that Howard was inspired to share his knowledge of the region in a weekly news roundup, gaining an ever-growing, dedicated following.

Howard was a staunch social justice activist, with a strong belief in the power of faith, inclusivity, and humor under all circumstances. He was a member of the Rock Spring Congregational United Church of Christ (UCC), where he dedicated himself to the Board of Social Action and Mission, the Open and Affirming Committee, the Potomac Association, and the UCC Palestine-Israel Network. In 2013, Howard was part of a small contingent of church members who travelled to Israel and Palestine to begin a partnership with the Church of the Redeemer in Jerusalem. He also enjoyed a weekly tea time with a church member of limited mobility, and for many years, coordinated the church’s Bread for the World advocacy day on Capitol Hill.