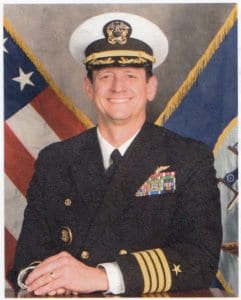 Capt. Huffman and his family moved into the City of Falls Church in 1980 where he was an International Baccalaureate diploma recipient, graduating from George Mason High School in 1985. Winning an appointment to the U.S. Naval Academy was the beginning of his career in the Navy, graduating from the academy in 1989. The IB program at Mason provided him with the necessary challenges he needed to be successful in the academy.

At flight school, Huffman logged over 2,800 hours in the cockpit of 24 different types of aircraft.

Huffman and his wife, Judy, are now stationed in Bremerton, Wash., homeport of the USS John C. Stennis. The Huffmans are the proud parents of three children: Matt, is a naval aviator in training and graduate of the Naval Academy; Lauren is a St. John’s College graduate; and Nick is a member of the Corps of Cadets at Virginia Tech.

Huffman took over the Stennis on February 15, 2016 at Naval Base Guam. There are currently 11 U.S. aircraft carriers in service around the world.