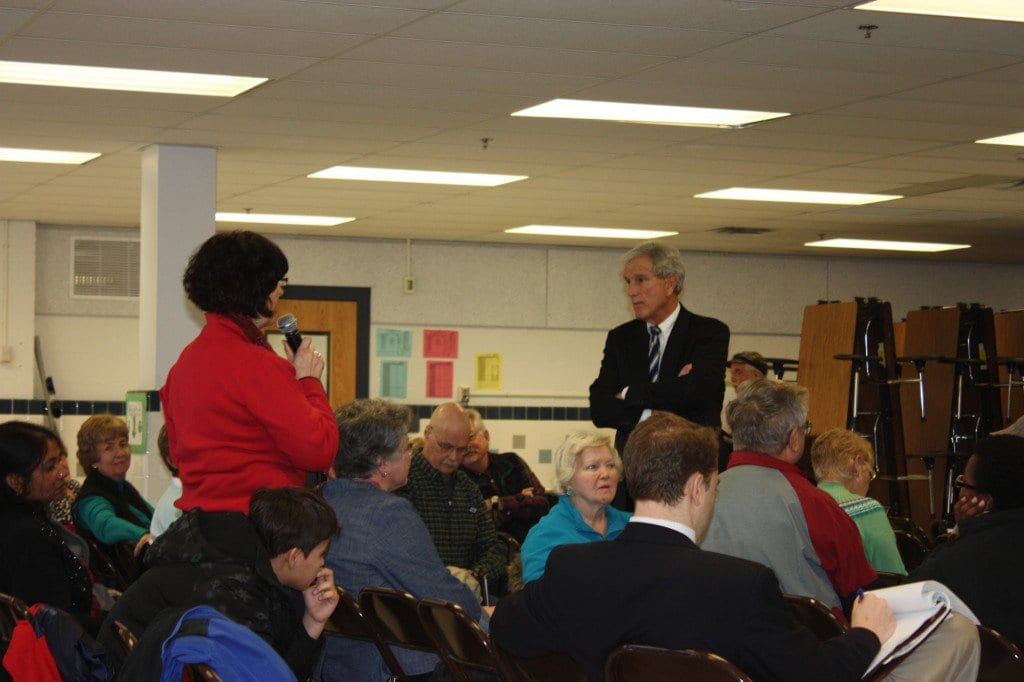 Senate Majority Leader Richard Saslaw told a town hall meeting in the Sleepy Hollow section of greater Falls Church today that Gov. Terry McAuliffe will kick off a major political offensive next week to overcome Republican resistance to Virginia’s buying into the Affordable Care Act’s expansion of Medicaid coverage in the state. More than 400,000 Virginians are being denied access to health care because of the GOP’s opposition in the House of Delegates in Richmond, but Saslaw, whose district includes the City of Falls Church, said he was “hopeful” that that will change before the end of the legislative session.

Saslaw said that McAuliffe is prepared to call the legislature back into a special session in March if necessary to gain the support necessary for the Medicaid expansion, which is being denied solely for political ideological reasons. “All of the Cbambers of Commerce in the state are in favor of the Medicaid expansion,” Saslaw told over 60 persons assembled for the town hall at the Sleerpy Hollow Elementary School. “The reasons are straight forward. Providing care for the uninsured is about 10 times more costly than providing Medicaid coverage,” especially, he said, when the uninsured avoid seeking medical care until their conditions have worsened to the point of requiring more expensive treatments.

The millions in federal aid that failure to agree to the expansion is costing Virginians have already caused on hospital in southwest Virginia to close and is threatening the jobs of 12,000 at another health care facility on the brink of insolvency.

Saslaw appeared with State Del. Kaye Kory and State Sen. David Marsden at the town hall. Kory said that the wide GOP majority in the House of Delegates has been more recalcitrant and obstructionist than ever this session “in an effort to smack around the (Democratic) govenor as much as it can.” Facing a Democratic-controlled Senate and State House has made the House Republicans more stubborn than ever, she said.

Saslaw said that a number of more moderate Republicans are compelled to avoid working with Democrats on compromise legislation because they still face the threat of radical rightwing opposition in their own primaries, which worked to knock at least one such Republican out in Loudoun County for going along with the transportation legislation passed last year.

He suggested he will help “a lot” three such moderate Republicans who are facing such primary challenges because they are in districts that would never go Democratic, anyway, but are currently held by Republicans more willing to compromise to get things done for the people of the state.

Marsden announced there will be a hearing in Richmond next Thursday in the Senate Education and Health Committee on the subject of how to reduce the chances of serious injuries, including concussions, in high school football. Concussions in sports are a major subject of concerns in the legislature in this session, including a bill to require not only sports trainers but also classroom teachers to receive training on how to detect and treat symptoms of concussions.

Kory said her own daughter suffered from a concussion and that the effect is to lose a lot academically as well as impacting participation in sports, she noted.

Juvenile justice reform is also a subject of growing interest in Richmond, Marsden said. He said that reform advocates have enlisted the efforts of the Pew Charitable Trust to examine existing conditions, and a report is expected soon that will be very troubling, he said. Forcing youths into centralized prisons is dangerous, forcing them to join gangs for survive, and the practice needs to be replaced by regional juvenile detention homes.

Marsden said he’s also working with the Humane Society to push legislation to shut down fox penning. There are 37 facilities in Virginia currently ranging from 125 to 800 acres where foxes are confined and subjected to cruel assaults from dogs. Of the 7,000 foxes brought to these facilities in the last six years, 60 percent die quickly from assaults by dogs, others die of illness, and only 10 percent survive. He said the attorney general’s office is considering shutting down the operations completely because they represent illegal animal fighting.