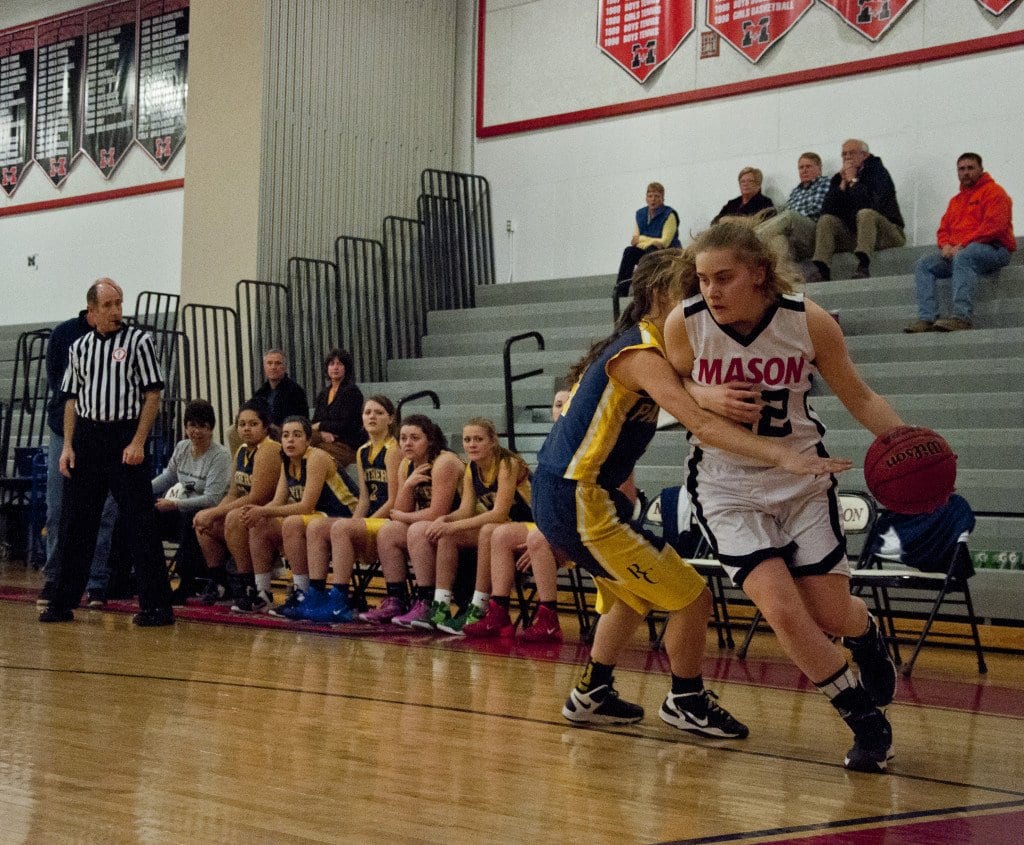 George Mason High School’s girls varsity basketball team is on a four-game win streak and has won seven of its last eight games after beating Rappahannock County High School 48-23 on Tuesday. The Mustangs (14-5, 12-1) are in first place in the Bull Run District and in Conference 35 with three games left in the regular season.

“We’re starting to come together. We’re a young team, and young teams make mistakes,” said Mason Head Coach LaBryan Thomas. “And once we worked through getting those mistakes and fundamentals back on track, we’re a solid team.”

The Mustangs sprinted out to a 13-2 lead in the first four minutes of the first quarter of their matchup against the Panthers (2-12, 0-12) and never looked back.

They took advantage of 12 turnovers committed by the Panthers in the first two quarters and finished the half ahead 35-8. 18 of the Mustangs’ first-half points came from three-pointers – four different Mustangs connected from behind the arc for those points.

“That’s our weapon,” Thomas said. “We shoot threes. … We’ve got a lot of people who can shoot the ball, and that’s what makes us dangerous.”

The Panthers outscored the Mustangs 15-13 in the second half, but had gotten down by too much to make a comeback. Junior forward Katie Goodwin led the Mustangs in scoring with 13 points and senior guard Julianna Rollo added nine points to the Mustangs’ tally.

George Mason’s rout of the Panthers was its second blowout in a row. The Mustangs beat William Monroe High School 52-21 last Saturday. The last time the Mustangs played the Dragons (3-12, 3-8) in mid-December, they only won by seven points.

“We’ve gotten better as a team. You know, we’ve grown closer and we know each other’s strengths and weaknesses and we play to those now,” Goodwin said. “We also know about Monroe – a lot more about Monroe, and we shut down their two leading scorers from the first game.”

Thomas said the team made young mistakes during its first match against the Dragons.

“We had a lot of turnovers in that game and we’re on a roll right now,” he said. “We’re correcting stuff and they’re playing great basketball right now.”

According to Thomas, the Mustangs averaged 23 turnovers a game but have cut that average to nine. One opponent they played during the early part of the season was Central High School – they managed to beat the Falcons (11-6, 8-5) by only six points then. It was a different story during their rematch last week even though the final score had the Mustangs ahead 57-51.

“The game was out of reach for the Falcons and we started putting in the latter part of our bench and they narrowed the margin,” Thomas said. “But it was a good game for their team.”

Rollo led the Mustangs with 19 points against the Falcons – 15 of which came from her five 3-pointers. Goodwin added 12 points to the Mustangs’ tally and grabbed 14 rebounds in the game.

“The team as a whole is getting better and better each game we play,” Rollo said. “I’m definitely getting into a stride with threes, and all that together goes well when we’re going into the postseason.”

The Mustangs are currently the top seed in the Conference 35 tournament. If George Mason beats Strasburg and Madison County, the Warren County Wildcats are the only team that can disrupt the Mustangs’ seeding in the postseason tournaments. This includes a possible berth to the Region 2A East playoffs.

“It’s all important because [the] top seed gets a bye in Conference 35 and [if] you get a bye in the first round and you make it to the second round, you automatically go to regions,” Thomas said. “So for us, we hold our destiny in our hands.”