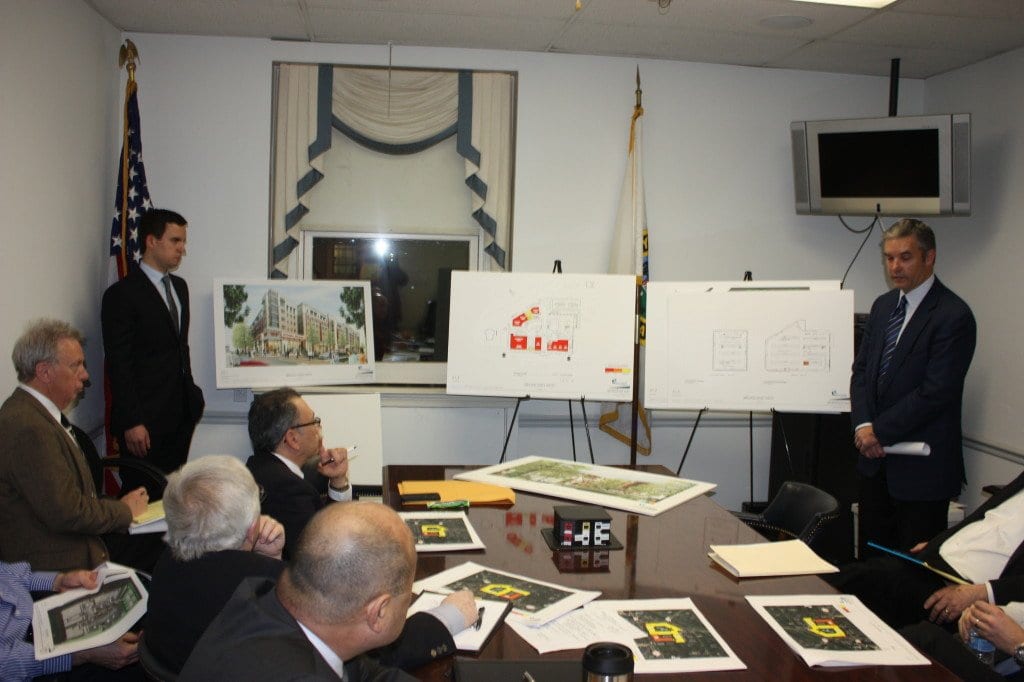 Spectrum Development, having secured all the parcels adding up to a four-acre site at the northeastern corner of N. West and W. Broad Streets in Falls Church, spelled out their latest plans for the site to a meeting of the F.C. City Council’s Economic Development Committee tonight, and said they need the Council to begin approving their project by the second week of February.

The mega-project that is to include a Hilton Home Suites extended-stay hotel with 150 rooms and 302 units of rental residential (70 percent studio and one-bedroom units), would occupy land currently home to long-time Falls Church businesses Kenny Currle’s City Sunoco, the 7-Eleven, the former Amigo Market, the Panjshir restaurant and Brits on Broad.

The project could net in tax revenue to the City betwen $1.36 and $1.7 million annually, according to Becky Witsman of the City’s Economic Development Office, present at Monday’s meeting.

Former F.C. City Manager David Lasso, who is assisting the Spectrum group with this project, said that even if the ball gets rolling next month, it may take up to a year for current businesses in the development area to have to leave. Peter Batten of Spectrum said tonight, however, that his group would like for some key businesses in the area to remain in new retail spaces that will comprise 40,000 square feet of the total.

Batten said he is “very confident” of the ability of retail to succeed at the location, which is a half-mile from the West Falls Church Metro station and equidistant from the Route 7 on-ramp to Route 66 and Route 29.

He said the smaller rental units are designed to attract a younger demographic to the City, and easy access to the W&OD Trail, across the street, will not only help define some of the retail but also some of the rental tenants who will want to be there.

As part of a buffer of the project to the residential properties on Park Avenue, the latest plan includes two single family homes on Park and a pocket park, modifications, Batten said, that have been well received by residential neighbors to the site.