For sportswriter and Falls Church resident Elliott Smith, picking the subject of his first book was a no-brainer. In May 2012, the Washington Nationals had gotten off to a hot start and were sitting in first place of their National League East division. At around the same time, Smith had been exploring book opportunities with publishers. The Nationals’ newfound success was a natural topic.

“I pitched the Nationals as a team on the rise with these two great players [Stephen Strasburg and Bryce Harper],” Smith said, adding that there was interest in the book “because there hadn’t been a lot of coverage on the Nats in the past.”

His debut book, Beltway Boys: Stephen Strasburg, Bryce Harper, and the Rise of the Nationals, came out this spring. Beltway Boys offers a brief history of baseball in D.C. and follows the ascent of the Nats from their futile first years in the nation’s capital to the long-awaited success of the 2012 season, through the lens of the rise of the two phenoms.

While Strasburg and Harper were learning how to navigate their ways through the majors, Smith too was learning on the fly. Smith was a seasoned sportswriter. He spent six years with Washington state’s The Olympian, covering the Mariners and the Seahawks, before stepping out as a freelance writer. He’d covered the Nats for national news outlets like The Associated Press. But writing a book was new. As a first-time book author, he faced a series of obstacles in completing Beltway Boys.

“The biggest challenge was actually sitting down and writing the book,” Smith said. “I’d never written a book before, so learning the rhythms of writing a book was a challenge – figuring out how to make it flow and make it long enough.” 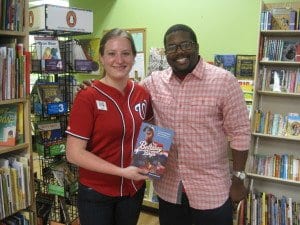 In 2012, Strasburg was returning from a yearlong absence due to Tommy John surgery on his pitching arm. In order to protect their ace, the Nationals opted to impose a highly scrutinized innings limit on the right-hander. Like Strasburg and his ever-approaching 170th inning, Smith also had a deadline bearing down on him.

“I didn’t have a lot of time to write the book, just about four months, from June to October, so that was tough for me as a first-time writer,” he said.

Not only did Smith have to keep up with the ever-evolving Nats season (one that ended up running several weeks past his initial deadline), he says he was not granted much access to the team.

“I was surprised,” Smith said. “I figured they’d be happy to get any kind of publicity with the history of them not getting a lot of national coverage.”

Harper’s call up in April did earn the Nats some extra buzz, and the 19-year-old rookie quickly set about making a name for himself. However Harper, like fellow rookie Smith, was met with adversity early in his career.

In the first inning of a Nats-Phillies game, just weeks after Harper’s first appearance, pitcher Cole Hamels of the Philadelphia Phillies sent Harper a message by beaming him in the back with a 93-mile-per-hour fastball. Two batters later, Harper stole home.

Like Harper, Smith was also able to persevere. Smith supplemented the limited contact with extensive background research and interviews with other people around the team.

Harper has followed up his breakout debut season with another all-star game appearance and Strasburg has pitched well, but not received much run support on the way to a disappointing 5-7 record despite a 2.99 earned run average.

As for Smith, who is currently enjoying his first proverbial offseason, he looks forward to getting started on another book.

“I’d love to do it again,” he said. “It was a great accomplishment, and I’d love to get another book out there.”