Mike Beyer says his uncle, sculptor Richard Beyer, believed in public art. The artist, who died last April at the age of 86, was best known in the art world for “Waiting for the Interurban,” a sculpture that has become an icon of the Seattle cityscape. But around Falls Church, he’s better known for his pigs.

Richard unveiled his sculpture of a farmer tossing food into a trough for his hogs outside of Falls Church’s Don Beyer Volvo 29 years ago, and it has since become a Falls Church icon.

Mike Beyer, head of the Beyer Automotive Group, says it’s probably the best piece of advertising the business has done in its 40 years. Onlookers regularly stop to take photos of the statue. When the Washington Redskins offensive line was nicknamed “The Hogs” in the ’80s, the players would come by and have their photo taken with the sculpture. Locals give directions using “the pigs” as a landmark for W. Broad Street and Gordon Road.

Richard’s final work will become another piece of public art when it is unveiled this Friday across the street from the pigs, outside of Beyer Kia.

Those who visit the site of the new statue won’t yet be able to see it. Mike wanted to create suspense before the unveiling. He had originally planned to cover the sculpture in a chained tarp, but Richard’s grandson Dan Beyer, himself an artist, came up with a different idea. Now the tarp-covered statue is encased in whiteboard walls, with a tiny hole cut into each side giving a glimpse of the new piece. Visitors are invited to write their guesses as to what the sculpture might be on the walls.

The enclosure itself has become a piece of public art in the weeks since its installation, as guesses have been written in and erased to make room for more guesses and colorful doodles have been made on the white space.

Mike hopes that, as the pig statue has, the new piece will get people talking. The meaning of the pig statue – be it political or existential or something else entirely – has long been debated. Mike takes the piece at face value: His father and uncle, Don and Richard, grew up on a farm in McLean and had hogs.

Richard proposed the pig statue as a joke, but Don liked it. It was at the farm, Mike says, that Richard started making art. He enlisted in the U.S. Army and fought in Germany and France during World War II. After returning to the farm, Mike said, Richard would whittle behind the barn.

“That was sort of his way to recover from seeing terrible things,” Mike said.

Richard and his family eventually relocated to Seattle, where he established himself as a sculptor. After his death, a memorial service held at “Waiting for the Interurban” became a public celebration.

Festivities are planned for the unveiling of Richard’s final work, a piece in cast aluminum just like the pig statue it will join. It’s a durable material that reveals the artist’s intention to put his work outdoors and make it accessible to all.

“He would want it out there so that everyone can enjoy it, or not,” Mike said. “And hopefully this new piece will be received well.”

The unveiling of the new work is scheduled for this Friday at 5 p.m. Former Falls Church Mayor Carol DeLong, who unveiled the pig statue, will do the honors for the new statue. 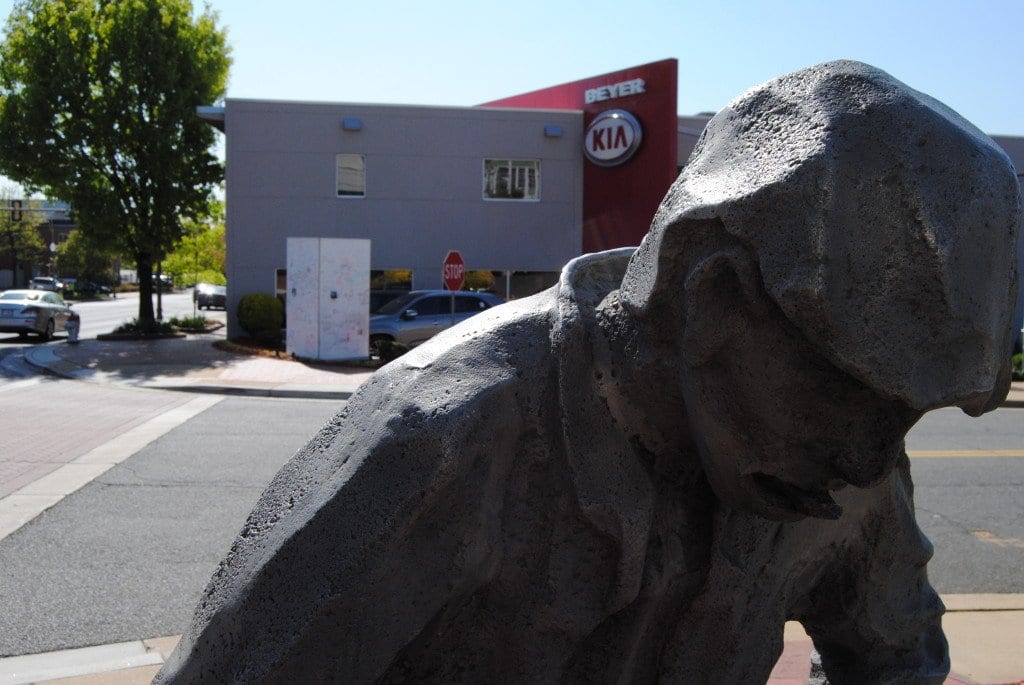