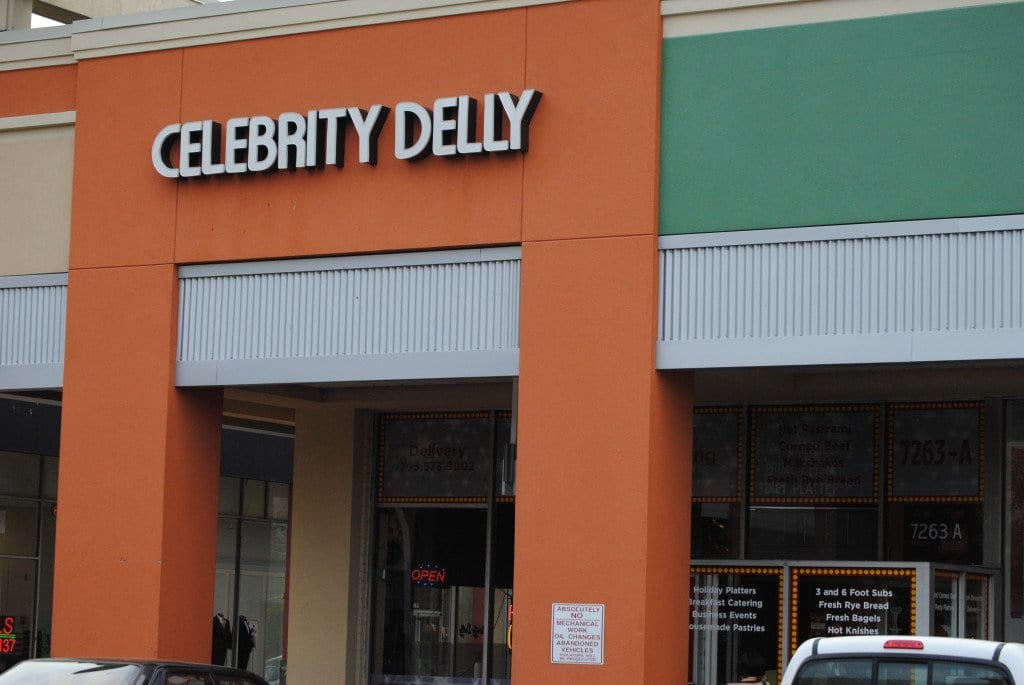 Once upon a time, a brilliant mind decided that an excellent way to serve meats, cheeses, and other toppings would be between two pieces of bread. Some claim it was the Earl of Sandwich, John Montagu, who earned those founding honors hundreds of years ago. Whomever its inventor may be, he or she would certainly be proud of a creation whose legacy has expanded to ubiquity. From the basic bologna-on-white of lunchboxes across the nation to the dressed-up fare of New York delicatessens, the sandwich is recognized and beloved by many. That’s why it’s nice to see such a simple concept treated with care. That’s where Celebrity Delly comes in.

The deli and catering business, first launched nearly 40 years ago, has a restaurant in Falls Church’s Loehmann’s Plaza where diners can enjoy subs, clubs, and more from a lengthy menu of sandwiches (and admire some kitschy celebrity-inspired décor in the process).

The Reuben is a staple New York deli sandwich, and Celebrity Delly’s take is beyond reproach. The Reuben ($10.99) comes to the table split in half, exposing a tower of rosy corned beef to daunting and exciting effect. Russian dressing seeps out of the bread. The buttery, grilled rye bread is surprisingly thin. One might question its ability to stand up to the weight of this hefty sandwich, but it does the job. Rye bread, tangy dressing and sauerkraut, and melted Swiss cheese are the supporting acts that don’t steal the spotlight from the star of this sandwich: hot corned beef. The cured meat is savory and not too salty, and so tender that it falls to chips on the plate when it wriggles free of the rye bread.

The submarines swap out bread slices for big, chewy rolls, a wider canvas for toppings. The Jimmy Lange ($11.99) needs a sub roll to sustain its massive, juicy fillings. Here, thin shaved slices of grilled pastrami are joined by sautéed green peppers, mushrooms, and onions, all slathered in melted provolone cheese and mayonnaise, with some lettuce for crunch.

Even the pitas, normally the base for a more modest sandwich with their limited capacity, are packed to the breaking point. The Pita Perfection ($10.99), one of a few vegetarian options on the menu, serves two clamshells of pita bread halves bursting with fresh mozzarella cheese, crisp spinach, and hunks of avocado. Tomato, hummus, cucumber, and a bit of sharply tart vinaigrette complete the sandwich.

These massive sandwiches are meals unto themselves, but for about $3 more any one can be made into a platter with the diner’s choice of side dishes, from lighter fare like a dill-sprinkled cucumber salad to deep-fried favorites like French fries.

While they are surely the focus, the Celebrity Delly menu isn’t limited to sandwiches. Dinner platters, salads, hot dogs, soups, and more are available, not to mention a full range of breakfast dishes, from breakfast sandwiches and omelets to pancakes and waffles. The appetizers aren’t chopped liver, either (unless, of course, one is ordering the chopped liver). The knishes, made in-house, come in potato ($3.99) and meat ($4.99) varieties, both served in a pastry pocket that is flaky on the outside and soft and doughy within.

The caricatures of celebrities painted in the dining room and the cheeky jokes and sayings on plaques fixed along the walls are fun and a little silly, but when it comes to the menu, Celebrity Delly is serving up serious sandwiches.