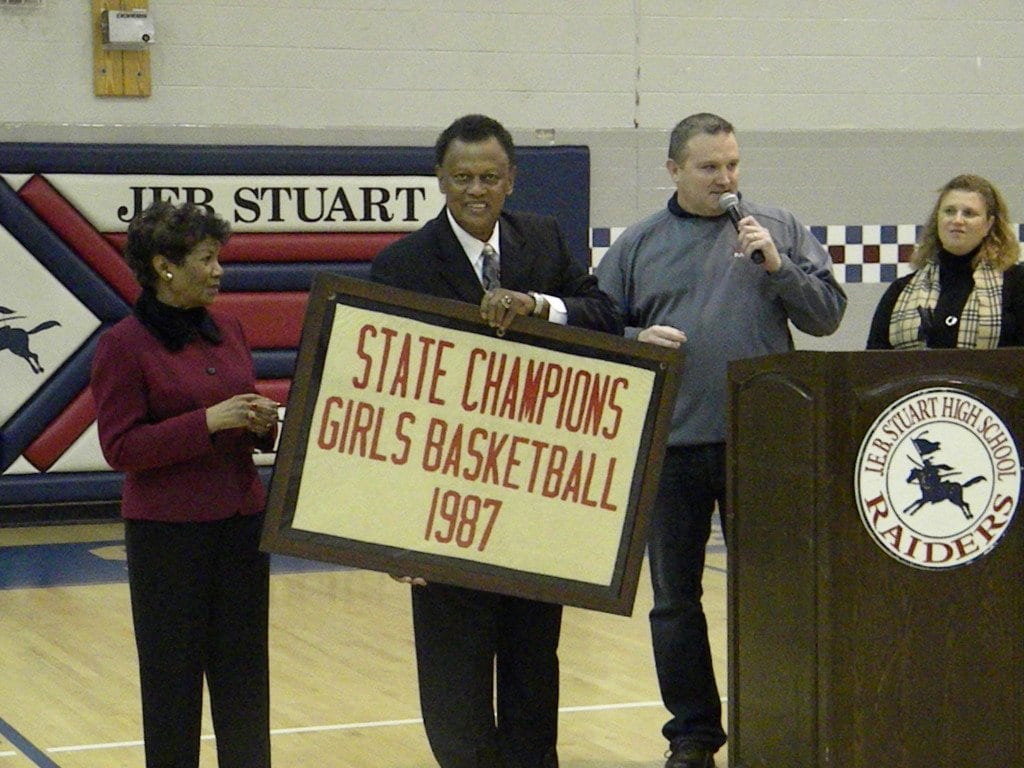 When Ron Wilson interviewed for a teaching job at J.E.B. Stuart High School in 1973, Bill Parrish, the principal at the time, asked Wilson if he was interested in coaching.

“Of course I said yes,” Wilson said. Wilson spent the next 38 years teaching special education and many years coaching various teams at Stuart.

Wilson’s dedication to the school was rewarded with the naming of the school’s gymnasium after him. The former Raiders coach was honored at a naming ceremony in early February at the Raiders’ boys-girls basketball double-header against district rival Wakefield High School.

“Ron had an unparalleled commitment to the students, athletes, staff and community of J.E.B. Stuart through athletics, academics and friendship,” said Sharon Ponton, assistant director of student activities at Stuart and chair of the health and physical education department.

“It is a tremendous honor,” Wilson said. Wilson was “surprised” when Brian Garvey, Stuart’s director of student activities, and former Stuart principal Pam Jones told him about the dedication. The school board passed a resolution at their May 24, 2012, meeting to name the gym after Wilson.

“We decided at that time to hold the public naming ceremony during our basketball season in order to allow Ron the homage he deserved,” Ponton said.

Wilson started out as an assistant basketball coach for the freshman boys basketball team in the fall of 1973 and was an assistant coach with the girls track team in the spring of 1974. Coaching was an obvious choice for Wilson, who played junior varsity and varsity basketball in high school. When he expressed interest in coaching to Parrish, Wilson was directed to Bob Robyak, Stuart’s athletic director at the time.

“They had filled their paid positions in basketball and track,” Wilson said. “But I could be an unpaid assistant. Of course I said yes.”

From that point until his 2011 retirement from Stuart, Wilson served as an assistant or head coach for the freshman and junior varsity boys basketball, freshman football, cross country and track teams.

At the time of his retirement, Wilson’s record as a head basketball coach at the varsity level was 245-361. He claims a much higher success rate in helping his players succeed in life off the court.

“80 percent to 90 percent of the players I coached furthered their education and are successful adults,” Wilson said. “It is a blessing I was part of my students’ and players’ lives.”

Wilson came to Fairfax County from North Carolina, where he coached basketball, track and football at Jones Senior High School, on the recommendation of a college roommate. Wilson went to Fayetteville State University in North Carolina.

“The joy I received from my students was seeing them graduate, finding and maintaining a job. I was so proud of all my students,” he said. Ponton said that Wilson also helped his students get positions as team managers and athletes while he was at Stuart.

The night that Wilson was honored, four generations of Stuart teachers, staff, alumni, friends and family, including his significant other Alice, helped pack the gymnasium being named for him. According to Ponton, he received a standing ovation when placards reading “Ron Wilson Gymnasium” were unveiled underneath each of the scoreboards. Although he retired in 2011, Wilson continues to support the Stuart athletics program as a spectator at various sporting events and ticket taker at Raider football games.

When asked why Stuart decided to honor Wilson, Ponton said, “He deserved it.”