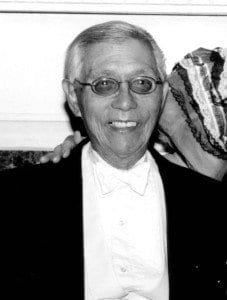 AP was born in 1922 in Beijing, China, educated at the Jesuit Prep School in Tianjin, China, and went on to graduate from Saint John’s University in Shanghai, China. He earned his Master of Business Administration degree from New York University in 1948.

After he gained his graduate degree, AP could not return to China because of the ongoing Chinese Civil War and his father’s involvement as a general in Manchuria, so he remained in the U.S. AP was recruited by and joined the Voice of America where he worked for 34 years throughout the Cold War in the Chinese Branch and retired as the editor of the Mandarin Chinese Bureau. He maintained an active interest in international affairs throughout his life.

He was a lifetime member of the Falls Church Village Preservation and Improvement Society and a charter member of the Victorian Society at Falls Church, where he enjoyed participating in Falls Church living history events. He was a gifted lifelong tennis player and continued the sport until he was well past 80 years old. He was also an avid reader in the field of government and world affairs. AP loved world travel, and visited Scandinavia seven times. After President Nixon opened relations with China, AP was able to make a visit to his birthplace in 1978 for the first time since he had departed China for the U.S. for graduate school.

AP is survived by his wife of 37 years, Midge H. Wang; sisters Maci Chang of Hong Kong and Helen Preston of San Antonio; nieces Mai Barrett in New Canaan, Connecticut, and Gloria Wang and Linda Chang of Hong Kong; a great-niece, Anne Catherine Barrett of Springfield; nephews Ming Hua Wang of Los Angeles and Loon Hua Wang of Houston; step-son Gus Knapp and his wife, Terry Hooper, of Falls Church; and step-son Michael Knapp and his wife, Amy, and their daughters, Ellen and Emma, of McLean.

A memorial service and interment will be held later spring.