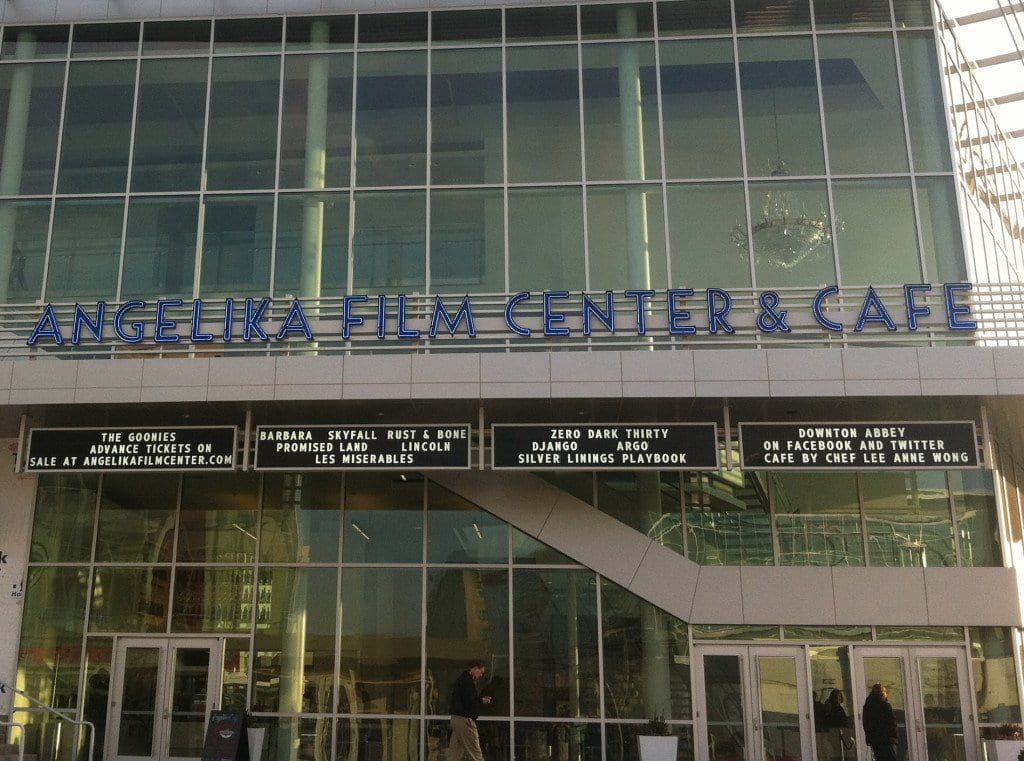 The idea seems preposterous, but it’s true: A quality meal can be had within the walls of the Angelika Film Center.

The memories of jerky-like hot dogs, over-buttered popcorn, and similar movie theater fare start to fade upon approaching the boutique theater, part of the growing Mosaic District project in Merrifield. The chef behind the theater’s eats is Lee Anne Wong of “Top Chef” fame, and her name appears on the marquee alongside the names of Oscar contenders and art house flicks.

The café is situated in a corner of the theater’s striking lobby, glass-encased and tall with a chandelier overhead. Long wood tables offer a spot for communal dining, as does a long bar set against an outward-facing glass wall. The beer taps on the café counter and the bottles and cans within the space are a surprising enough find in a theater, but the fact that they dispense quality craft libations is downright astounding. Wines, too, are served, and for those who’d take caffeine over alcohol, this café has all the steamed-milk, espresso-mixed drinks of a coffee shop, served both iced and piping hot.

A trio of appetizers starts the menu, offering a small selection of foods with international appeal. The Seaweed-Edamame Hummus ($8) pairs a cup of the dip, strong on seaweed flavor, with a medley of crunchy crudités.

Salads and sandwiches make up the meal options. A mixed-greens side salad is joined by three entrée salads that combine ingredients of a vast and interesting range of flavors and textures. The Autumn Salad ($9) is advertised with a countertop sign as a limited-time offering. The suggestion that this salad is picked for its seasonal ingredients is impressive enough, but the intriguing mix of ingredients and the excellently blended flavors add to the effect. Big slices of roasted squash stand out amongst the greens, which are filled with strips of tangy pickled red onion, sweet and tart dried cranberries, blue cheese, and toasted pepitas, all in ample amount. The maple bacon vinaigrette, beyond piquing curiosity, adds a subtle smokiness to the blend. Chicken can be added for a few dollars more, but this salad is hearty eating on its own.

Sandwiches share billing with a pair of snacks: A cheese plate with dried fruit and crackers for savory snackers, and a dark chocolate fondue with fresh fruit, cake, and pretzels for those who prefer something sweet. All among this menu section come with not one, but two libation pairings (usually a wine or craft beer for each, though a bit of sake is one recommended partner to the Wasabi Chicken Breast Sandwich).

The Braised Shortrib Panini ($12) is so delicious that it may well inspire a visit to the theater not dependent upon seeing a film. Here, strips of short rib peek out of a large grill-pressed Hawaiian sweet roll. The tender meat and melted gruyere cheese are joined by caramelized onion sweetness and creamy and crunchy kimchi slaw.

As tasty as the food may be, diners should not expect an elegant presentation. Rather, and for the better, the gourmet eats the café serves are packed with portability in mind. Snacks, salads, and sandwiches alike are placed in plastic containers with lids. While a meal at the café provides an excellent opportunity to decide which movie to see, or debate a film’s finer points after the fact, reusable blue tote bags offered on the house make any meal pick portable and easily enjoyed during a movie.

The concession stand beyond the lobby has its own gourmet treats that work within the familiar framework of theater snacks, from hot dogs that command foodie attention with toppings like kimchi slaw, to bags of popcorn with flavor blends that go far beyond the traditional butter and salt (think beer-and-cheese flavored).

Though the tickets are expensive (expect to pay $13 to catch an evening show), a chance to enjoy the clever, delicious menu at the café (and concession stand) is a big part of the Angelika Film Center experience and makes paying the few extra dollars worthwhile.