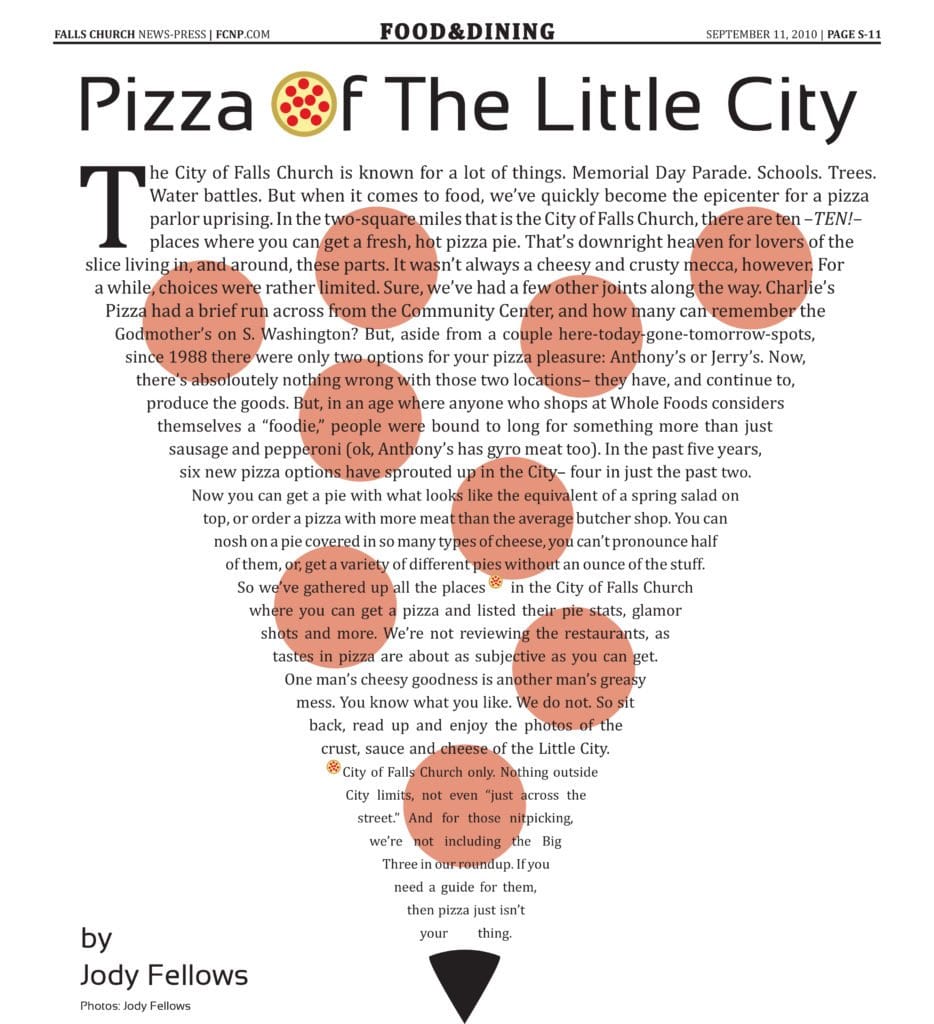 The City of Falls Church is known for a lot of things. Memorial Day Parade. Schools. Trees. Water battles. But when it comes to food, we’ve quickly become the epicenter for a pizza parlor uprising.

For a while, Anthony’s and Jerry’s (pictured) were the only spots to get a pie in the City of Falls Church. * The Big Three not included. (Photo: News-Press)

In the two-square miles that is the City of Falls Church, there are ten -TEN!- places where you can get a fresh, hot pizza pie. That’s downright heaven for lovers of the slice living in, and around, these parts. It wasn’t always a cheesy and crusty mecca, however. For a while, choices were rather limited. Sure, we’ve had a few other joints along the way. Charlie’s Pizza had a brief run across from the Community Center, and how many can remember the Godmother’s on S. Washington? But, aside from a couple here-today-gone-tomorrow-spots, since 1988 there were only two options for your pizza pleasure: Anthony’s or Jerry’s. Now, there’s absolutely nothing wrong with those two locations- they have, and continue to, produce the goods. But, in an age where anyone who shops at Whole Foods considers themselves a “foodie,” people were bound to long for something more than just sausage and pepperoni (ok, Anthony’s has gyro meat too).

In the past five years, six new pizza options have sprouted up in the City- four in just the past two. Now you can get a pie with what looks like the equivalent of a spring salad on top, or order a pizza with more meat than the average butcher shop. You can nosh on a slice covered in so many types of cheese, you can’t pronounce half of them, or, get a variety of different pies without an ounce of the stuff. So we’ve gathered up all the places* in the City of Falls Church where you can get a pizza and listed their pie stats, glamour shots and more. We’re not reviewing the restaurants, as tastes in pizza are about as subjective as you can get. One man’s cheesy goodness is another man’s greasy mess. You know what you like. We do not. So sit back, read up and enjoy the photos of the crust, sauce and cheese of the Little City.

*City of Falls Church only. Nothing outside City limits, not even “just across the street.” And for those nitpicking, we’re not including the Big Three in our roundup. If you need a guide for them, then pizza just isn’t your thing.

A slice of cheese pie– an Anthony’s classic.

With the longest tenured pizza in The Little City, Anthony’s has been churning out their ridiculously cheesy pies since 1972. The Falls Church institution is the go-to spot for all types of family celebrations and, if you’ve grown up in or around the 22046, chances are you’ve celebrated a Little League or Rec season or two with a pizza party here.

Although Argia’s first opened in Falls Church in 1999, the Italian restaurant didn’t first start serving pizzas until the Fall of 2006. Since then, they’ve included a selection of Neapolitan-style pies including the classic Margherita and the aptly named Della Carne with sausage, pepperoni and pancetta. All Argia’s pies are 11” and made with their homemade dough.

Just recently crowned Best Pizza in the News-Press ‘Best of Falls Church’ contest last month, Flippin’ Pizza is the spot for big, foldable, floppy New York-style pizza. Ordering your pie is easy ‘cause there’s only one size: 18”. The slices are huge, and with names like Brooklyn, Bronx and Whitestone, their pies are NYC all the way.

The cheese melts just right from a slice of a large Jerry’s pepperoni pie.

While some may scoff at Jerry’s because it’s a “chain,” it holds the distinction of being the second oldest operating pizza joint in the City, first opening in 1988. And, for a long while it was one of only two places to get a slice in ‘ol F.C. Since the great pizza awakening in recent years, it hasn’t received the same amount of attention. However, it’s still churning out the cheese and crust, not to mention the killer Monday night $3.99 large pie deal.

Make sure you get your doctor’s permission before diving into Mad Fox’s The Mob, a pie loaded with pepperoni, ham, salami, bacon, ground beef, Italian sausage and spicy sopressata.

When you first think of Mad Fox, pizza probably isn’t the first thing to come to mind, but you’d be sorely mistaken if you ignore this brew pub’s pies. Offered up in both Neapolitan- and New York-style (including a monster 20-incher); the Fox has some of the more unique and flavorful options in the City. With over 50 available toppings (yes, we counted), there’s practically endless ways you can dress up your pizza. Oh yeah, they serve beer, too.

The Quatro Stagioni. Salami, artichoke, arugula and olives represent the four “seasons” in this Orso pie.

The most pedigreed pizza of the bunch, Pizzeria Orso is just over three months old but has already been lauded by a multitude of D.C.-area foodies and critics. Using premium toppings, ingredients and know-how, the husband-and-wife team of Edan and Thea MacQuaid have brought a truly unqiue pizza experience to Falls Church. Edan, of 2 Amy’s, Red Rocks and Paradiso pizza fame, knows Neapolitan and he knows it very, very well.

A fresh-out-of-the-oven sausage, onion and peppers pie waits to be served up.

A slice of the Pie-Tanza’s delectable white pizza with fontina.

When one pizza departs, another shall take its place. While that probably wasn’t Pie-Tanza’s thinking when they came to the City of Falls Church, it certainly was the case. Taking over the space of Pizza Hut in Falls Plaza, Pie-Tanza forgoes the former’s pan crusts for smaller, thinner Neapolitan pies. Their specialty wood-fired pizzas range from the simple tomato and oregano to the more complex onion and Gorgonzola.

Who said the West Coast can’t do pizza? Zpizza originated in Laguana Beach, and one look at the menu and you’ll see this ain’t your average pizza joint. With 100% organic sauce and whole wheat crust, zpizza is one of the few pizza places that may past muster with the more health-conscious crowd out there. With a Thai pie featuring peanut sauce, cilantro and bean sprouts and another called the Berkeley Vegan, it’s also got some of the most unique toppings in The Little City.

Want to go on your own Little City Pizza Crawl? Check out our map.

What Falls Church pizza joint gives you the most bang for your buck? We’ve got the answer here.

(All News-Press photos by Jody Fellows)