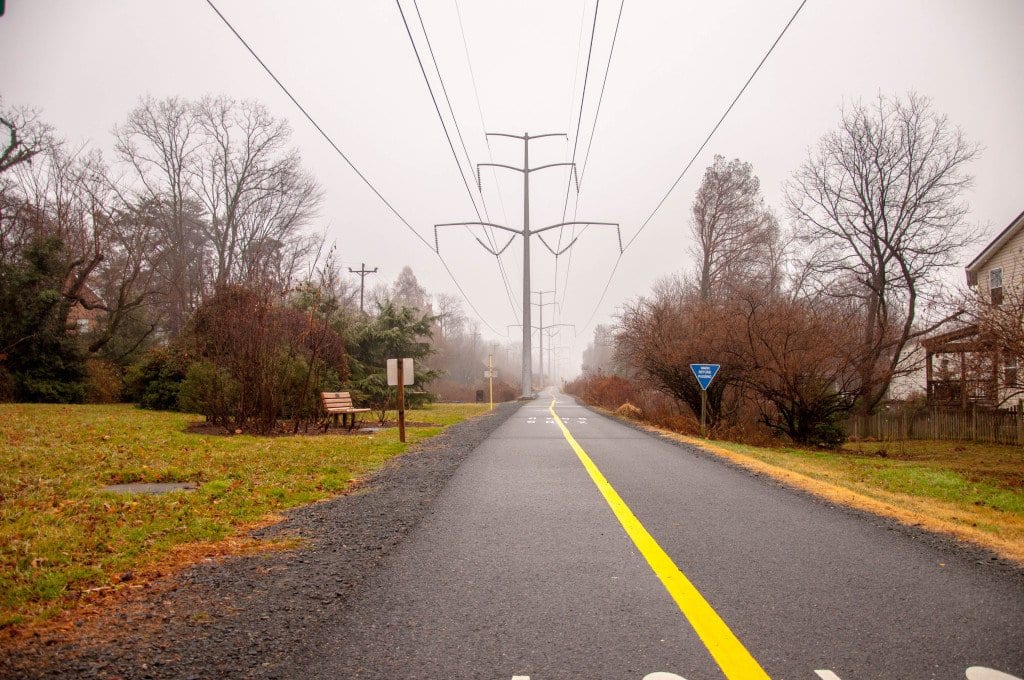 A major 1.2-mile stretch of the W&OD Trail bike path that traverses the City of Falls Church from one end to the other of its 2.3 square miles will soon be enhanced with the benefit of $3.2 million from the Northern Virginia Transportation Authority and turned into a dual path — one for bikes and the other for pedestrians. The area of the transformation will run from the bike bridge over West Broad to the east side of Little Falls Street.

Funding for the project comes from the wider resources of the NVRPA, and not directly from Falls Church citizens, who will nonetheless be major beneficiaries.

The Falls Church City Council voted unanimously Monday to authorize City Manager Wyatt Shields to enter into the agreement with the NVRPA for its execution.

The W&OD Trail has been identified in City planning documents are “one of the great parks within the City,” a “grand 16-acre park.” The award funds the design and construction of separate, parallel bicycle and pedestrian trails on the W&OD Trail that will increase the safety and usability of the park.

The current 10-foot wide shared-use trail will be replaced by an 11-foot wide bicycle trail and an eight-foot wide pedestrian trail with a two-foot wide median in between. It will run for 1.2 miles from the bike bridge over W. Broad Street to east of Little Falls St. In addition, substandard curb ramps at the six street crossings along the way will be updated and the existing narrow wood-deck bridge over Four Mile Run will be replaced. The project will be launched next year and completed by late 2020.

Currently, the City staff and NVRPA are working jointly to implement the City’s master plan for the W&OD Trail, according to City officials. The separated walking and biking trails is one part of that master plan, which also includes improved crossings at street intersections, plazas and resting places that tell the history of the W&OD railroad predecessor to the trail, restored and native landscaping and added lighting.

Implementation efforts currently include updating all six street-at-trail crossings on the improved route in the City. Four of the crossings are being updated by City teams with funding from the City’s Transportation Alternatives Program (TAP), and the remaining two will be updated in conjunction with the Founders Row mixed use development project that was given its final approval by the Council earlier this fall and will be paid for by the developer.

The Northern Virginia Transportation Authority identifies the project as among the first in a phased effort to improve levels of service along congested portions of the W&OD Trail. Overall, the trail is 45 miles traversing the counties of Arlington, Fairfax and Loudoun counties, and including Falls Church, the towns of Vienna, Herndon and Leesburg.

It is seen as a broader effort to “encourage non-motorized transportation” by extending hours of use to include commuting hours, and includes in the Virginia Department of Transportation (VDOT) plan to widen Interstate 66 and construct a 20-foot wide W&OD Trail bridge over Lee Highway (Rt. 29) so that trail users will no longer have to cross hazardous lanes of traffic.

The new bridge and the six roadways that cross the trail in the City, each with sidewalk connections to provide direct access to commuter routes for Metrobus, “will significantly enhance first and last mile non-motorized access to the East and West Falls Church Metrorail stations and bicycle access for commuters continuing into Arlington County, Alexandria and Washington D.C.,” a VDOT statement says.

The dual trail effort, then, is seen as augmenting the effort to make bike transport more efficient in the wider regional picture. “The W&OD Trail passes through and near designated revitalization areas along Broad Street and Washington Street,” VDOT states, and as the City “is a regional activity center and is working to increase multimodal operations to keep up with regional travel demand,” the project “will increase usage of the W&OD and increase patronage at nearby commercial uses and employment destinations.”

The City’s role is essentially as a pass-through for state transportation funds. Approving the Standard Project Agreement for the Falls Church Enhanced Regional Bike Routes Project will make available one-time capital funds from NVTA totaling $3,244,959, and will allow the City to recover staff costs associated with administering the agreement, according to a City staff report.