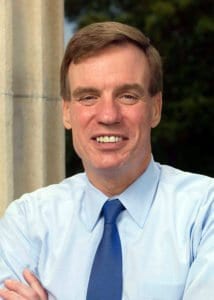 Virginia U.S. Senator Mark Warner, vice chair of the Senate Intelligence Committee, at a press conference today hailed the announcement by the U.S. Justice Department of 12 indictments of senior Russian military intelligence officials for aggressive;y intervening in the 2016 U.S. elections. He noted today’s round of indictments are on top of 23 indictments and five guilty pleas that have already come from the work of the U.S. Special Prosecutor Robert Muller.

Warner said that there should be no one-on-one summit between President Trump and Russian leader Vladimir Putin. There should be others in the room at a minimum, he said, because “with Trump’s ad hoc style of winging it, he could be taken advantage of.” Warner also said that if the summit does not put today’s revelations at the top of the agenda, it should be cancelled outright.

Further, he said the White House needs to take an aggressive role working with a bi-partisan effort to prevent further Russian intervention in the 2018 U.S. elections and that the U.S. needs to strengthen its relations with its allies who are being subjected to similar Russian efforts.

After the press conference, Warner issued the following written statement this afternoon:

“Today’s indictment by the Department of Justice of 12 Russian spies for hacking our election is another testament to the quality and professionalism of the investigation being run by Special Counsel Robert Mueller. The President and his allies must cease and desist their baseless, inflammatory attacks on an investigation that, even before today, had already produced multiple indictments and secured guilty pleas from two Trump campaign aides as well as the President’s former national security adviser.

“Just this morning in the United Kingdom, President Trump blamed the poor state of U.S.-Russia relations on ‘the rigged witch hunt,’ claiming that it ‘really hurts our country and it really hurts our relationship with Russia.’ The President is wrong. As today’s indictment makes crystal clear, tensions between our two nations exist because Russia attacked our democracy.

“That’s all the more reason why he must not meet one-on-one with Vladimir Putin, who, in the absence of U.S. experts or advisers, will undoubtedly take full advantage of an ill-prepared President. And if the Administration is unwilling to make the facts laid out in today’s indictment a top priority for that discussion, then that meeting shouldn’t happen.”