Follow along with the News-Press as results from today’s 2017 Falls Church City Council, School Board elections and bond referendum are reported LIVE after polls close at 7 p.m. tonight. We’ll be updating continuously, so keep this page open (page will automatically refresh) to get the latest ballot results on the vote to see which of six Council candidates will fill the four up-for-grabs seats and which  six School Board candidates will win the four contested seats. 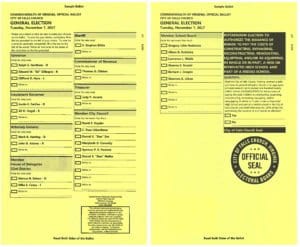 The other big ticket item on the ballot is the hotly-contested $120 million school bond referendum for the construction of a new George Mason High School.

Running uncontested for sheriff reelection is Stephen Bittle, Tom Clinton is unopposed in his reelection race for commissioner of revenue and incumbent Jody Acosta is running unopposed for treasurer.

Virginia Del. Marcus Simon, a Democrat who currently represents the 53rd District which includes the City of Falls Church, is up for reelection, running against Independent Mike Casey.