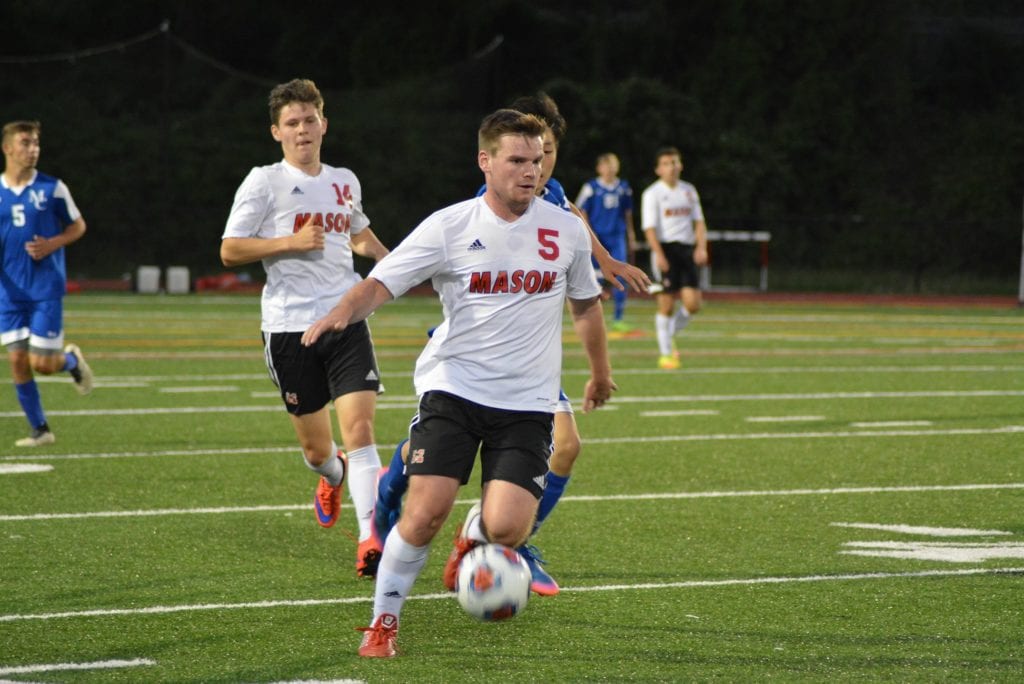 George Mason High School’s varsity boys soccer team continues its ascent up the Conference 35 and 2A East rankings with another batch of wins this past week as the team bested Madison County High School, 6-1, and Strasburg High School, 4-1.

On Tuesday, Mason (9-1-1) was firing on all cylinders in the opening and closing minutes of the first half against Madison. Two minutes into the game junior forward Peter Scardino sliced a low-arcing cross into the Mountaineers’ penalty box, allowing sophomore midfielder Nicholas Wells to knock a knuckle ball into the lower left part of the net. Four minutes later, Scardino again would serve up a teammate – this time it was senior midfielder Olo Sembera Baracco – who booted his shot off on a one-timer to give Mason a quick 2-0 lead.

A mid-half lull was ended in the 32nd minute when junior midfielder Carlos Mercado tapped in a loose ball after Mason’s umpteenth corner kick. Senior midfielder David Martinez forced Madison County to score an own goal when his right-to-left cross redirected off a Mountaineer player’s knee and past their goalkeeper. Right before the half, senior forward Connor Anderson blasted a shot that was too hot to handle for Madison County’s keeper and Mercado swooped in to sink the rebound to give the Mustangs a 5-0 lead by halftime.

A slow start to the second put Mason out of sorts. The offense began to dally with possessions and defense to relax their front. As a result, Madison County managed to zip a hard shot off the post, right to their unguarded forward who collected and scored the Mountaineers’ only goal of the match. For nearly 10 minutes after that goal, Madison County seemingly had three times as many shots on goal as they had the entire game and had Mason reeling.

“A bunch of guys just came out into the second half with their mind not in the game. Everybody was a little distracted with how we did in the first half,” senior defender and co-captain Wesley Quill said. “Just going forward with the rest of our games and the rest of the season, we need to make sure we come out of every game that we have fired up and ready to go, and not have any let-ups like we did tonight.”

Wells would connect on the game’s final goal after a long throw-in was deflected his way and he booted it off a one-hop. The 6-1 win felt good, but opportunities to improve, especially on set pieces, were abundant.

“We left a lot of goals out on the field,” Mustang head coach Frank Spinello said. “When we have balls just poking around six yards outside their goal, we gotta finish those.”

On the road against Strasburg last Friday, the Mustangs found themselves tied 1-1 after a competitive first half. Coming into the second, Mason was able to seal the win with a three-goal burst, aided by Sembera Baracco’s hat trick, and took care of the Rams, allowing Mason to leave with the win in-hand.