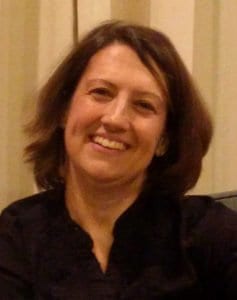 Sara Marie Lacopo passed away April 3, 2017 at the TRU Community Hospice Care Center in Boulder. She was 41 years old.

Sara was born on October 2, 1975 in Freetown, Sierra Leone to James Patrick and Patricia Mary (Sykes) Kelley. She moved to Falls Church, Virginia in 1978 where she attended George Mason Junior/Senior High School. She graduated from the Georgetown Visitation High School in 1993. Sara then attended Cornell University where she graduated in 1997 and was a member of the Kappa Alpha Theda Sorority and the Whistling Shrimp Improv Comedy Group.

Following graduation Sara began working for Collette Tours guiding people all over the world from Nashville to Australia.  While leading a tour in New Orleans she met Michael Lacopo. On January 18, 2003 she married Michael in New Orleans, LA. On June 4, 2003 they welcomed their son Jack to the world. Together they moved to Colorado in 2008 and to Longmont in 2014.

In a spur of the moment decision, Sara participated in the Groundlings, an improv comedy theater in Los Angeles. She worked for Clinica Campesina from 2009 until 2013 when she retired on long term disability.

Sara had been an active member of the Catholic faith. She participated in a local Lafayette theater group where she shined. She enjoyed comedy and humor. Most of all she loved her family especially her son.

She was preceded in death by her loving grandparents Daniel and Artus Kelley and admiring uncle Daniel Thomas Kelley of Beloit.

Sara is survived by her husband Michael and son Jack of Longmont; her parents James (Margo Tully) Kelley of Falls Church, VA and Patricia Kelley (Craig Hafner) of Boulder; her brother David (Phoebe) Kelley of Longmont; her sister Wendell (Tim) Pohlman of Carbondale, IL; and her nieces and nephew Alice, Alex, and Isabel.

A Memorial service will be held at 11 a.m. Thursday April 13, 2017 at Ahlberg Funeral Chapel.  In lieu of flowers, memorial contributions can be made to TRU Community Care at TRUcare.org/donate.  Cremation entrusted to Ahlberg Funeral Chapel and Crematory.Visit www.ahlbergfuneralchapel.com to share condolences.