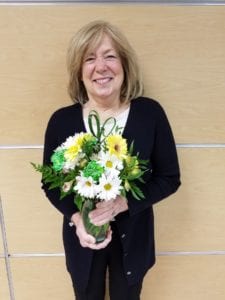 Barb Cram has been named the Grand Marshal for this year’s City of Falls Church Memorial Day parade this much. Cram was selected by the Recreation and Parks Advisory Board to preside over the festivities taking place May 29.

“The best part about living in Falls Church is getting to know and work with so many diverse people,” said Ms. Cram in a City of F.C. press release Monday. Cram, who has lived in Falls Church since 1978. “I’m just really fortunate I live here.”

Cram is the president of Falls Church Arts and has produced the City’s annual Watch Night News Year’s Eve celebration for the past 10 years. “Watch Night would not happen without Barb,” said one of her nominating letters for the award. “It’s a fun, unique experience unlike any other in the region. The City is lucky to have such an amazing volunteer at the helm of the event.”

In the City’s press release, a nominating letter was quoted saying “That’s just the tip of the iceberg, Barb was the volunteer coordinator for donation drives in the City, including both the West Virginia flood relief and the Syrian Refugee Blanket and Coat drives. She is also involved in the Chamber of Commerce, her church, the Plein Air Festival, and so, so much more.”