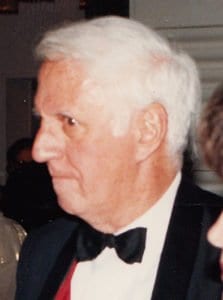 He was best remembered for the athletic ability as a 25-year-old Associated Press reporter in July 1953 to win a dash ahead of some 200 fellow newsmen to the only phone at the site of the Pyongyang, North Korea, signing of the armistice ending the Korean War. He was thus the first to report it to the world. He had 15 seconds to say, “Flash! The Korean War is over,” before a military official took the phone away from him.

The tall and silver-haired Summerlin had a touch of greatness tempered by the humility that usually accompanies the calling of a true newspaperman.
He was in the twilight of his tireless career when he launched a new news venture, the Global Fax News, in 1989 designed to exploit the then-new, pre-email technology of the telefax machine to bring news reports to subscribers in Asia. The idea was to have faxed news updates distributed aboard major airline flights throughout Asia.

Summerlin retained journalist Nicholas Benton, who subsequently founded and has led the Falls Church News-Press for 26 years, as his chief Washington and White House correspondent. Benton was freelancing at the time and had a White House press pass.

Unfortunately, a sharp economic downturn hit Japanese economy and swiftly dried up the venture’s funding source after less than a year. But Summerlin’s professionalism and fairness made a big impression on Benton, who invited Summerlin to his table at the annual White House Correspondents Association banquets for a number of years.

Summerlin had tons of stories to tell of his AP assignments in Cuba for a year and Argentina following his Korean War assignment. In pre-revolutionary Cuba, he became friends with Ernest Hemingway, who offered Summerlin an exclusive first interview when he won the Nobel Prize for literature in 1954 and asked Summerlin to organize a press conference.

When Summerlin was assigned to Argentina in 1955, he had a front row seat to a period of great political turmoil, including the rise of General Juan Peron and his charismatic wife, Eva. She became the subject of the popular musical and film, “Evita,” but to Summerlin she was always just a show. He was among the first to report the capture of Nazi fugitive Adolf Eichmann in 1960.

Summerlin returned to Cuba following Fidel Castro’s rise to power, then was assigned to the Philippines and became AP’s bureau chief for the South at New Orleans in 1963, covering the growing civil rights ferment. In 1965 he moved to New York where he worked for the AP another 10 years, and in 1975 he joined the New York Times as chief of its New York Times Syndicate.

When he retired from the Times in 1987, he would not settle down, founding the Hollywood Stars Inc. video interview service, the Saga Agency that provided celebrity still photos and interviews, and the short-lived Global Fax News. He wrote or co-wrote several books on foreign affairs
Born January 1, 1928 in Chapel Hill, North Carolina, Summerlin was married to Cynthia Cyr, who died in 2000. His survivors include a daughter in California, a son, Thomas A. Summerlin in Arlington, Va., and three grandchildren.

Thanks to John Rogers and the Associated Press for contributions to this story.