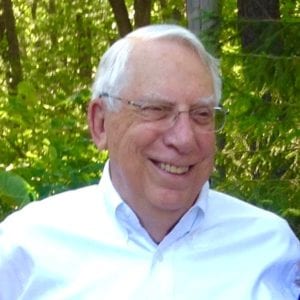 Dr. John H. Wells, EdD, who has been an active scouting leader in Falls Church for the last 24 years, died in his home on October 1 following a long illness. He was well known throughout this area as someone who was overwhelmingly generous with his time and always ready to assist Scouts and their families. As an Eagle Scout adviser, he worked tirelessly to mentor many scouts in Falls Church.

John Wells was many things. He was a devoted husband, father, and friend. He was an officer, a scholar, a leader and an educator. He was a man with countless stories and seemingly infinite energy. Always ready with a helping hand and a corny joke, he left everyone he met a little better, and a little happier, than he found them. He will be missed by many whose lives he influenced.

John was born July 20, 1934 and grew up in Walworth, Wisc. His love of the outdoors grew from a childhood that was spent swimming, camping and sailing with his twin brother David and his sisters Sue, Phyllis and Josephine. After losing both of his parents while still a teenager, John enlisted in the Marines. Four years later, he enlisted in the Air Force.

Although he started as an enlisted airman, he was selected for officer training, and eventually retired in the rank of Lieutenant Colonel. He won numerous medals and awards along the way, including the Bronze Star, the Republic of Vietnam Gallantry Cross, the Air Force Commendation Medal and the Army Good Conduct Medal (despite the fact that he was never in the Army).

John also seized every opportunity to further his education. Though he entered the Air Force with only a high school degree, he earned both his bachelor’s degree and his master’s degree while on active duty. He also started the coursework for his doctorate, which he earned after leaving the service.

After retiring from the Air Force, John dedicated his life to education.  He focused on adult education, proving time and again that it is never too late to use education to open new doors to a better future. John worked with public school systems, universities, federal agencies, nonprofits and even foreign governments to help improve education opportunities and programs.  John also co-founded Corporate University Enterprises and the Washington Area Corporate University Consortium, and he worked with Northern Virginia Community College to expand the Career Switchers program.

John’s other great passion was the Boy Scouts program.  In addition to being a lifelong scout, Eagle Scout and Brother in the Order of the Arrow, John served as an assistant scoutmaster, Eagle Board member, Unit Commissioner and District Vice Chair Commissioner for Programs.  His efforts were recognized with many scouting awards, including the Award of Merit and the prestigious Silver Beaver Award. But the awards he cared about the most were the ones he helped other people obtain. As a Life-to-Eagle mentor, John helped dozens of boys develop the knowledge, drive, and skills they needed to earn the Eagle Scout award.

There is hardly enough space left to mention all of the other notable parts of John’s life, including his time in Alaska and Okinawa, his service in the Vietnam War, where he ran a joint tactical air base in Da Nang, his years spent as a referee for college sports, his time teaching at the Air Force Academy, his brilliant woodworking abilities, his volunteer work in the community, his service on the Minority Business Development Committee for Fairfax, or the other myriad activities and projects into which he poured his energy.

But he is also on his way to see loved ones who left this world before him, including his son John; daughter Amy; sister Josephine; twin brother David; and parents David and Harriett.

A memorial service will be held at the Falls Church Presbyterian Church (225 E. Broad St, Falls Church) at 2 p.m. on Saturday, October 8.  Scouts in attendance are encouraged to wear their uniforms.

In lieu of flowers, the family asks that donations be made to the American Cancer Society or to Boy Scout Troop 895, at Troop 895, c/o Falls Church Presbyterian Church, 225 E. Broad St, Falls Church, Va. 22046.