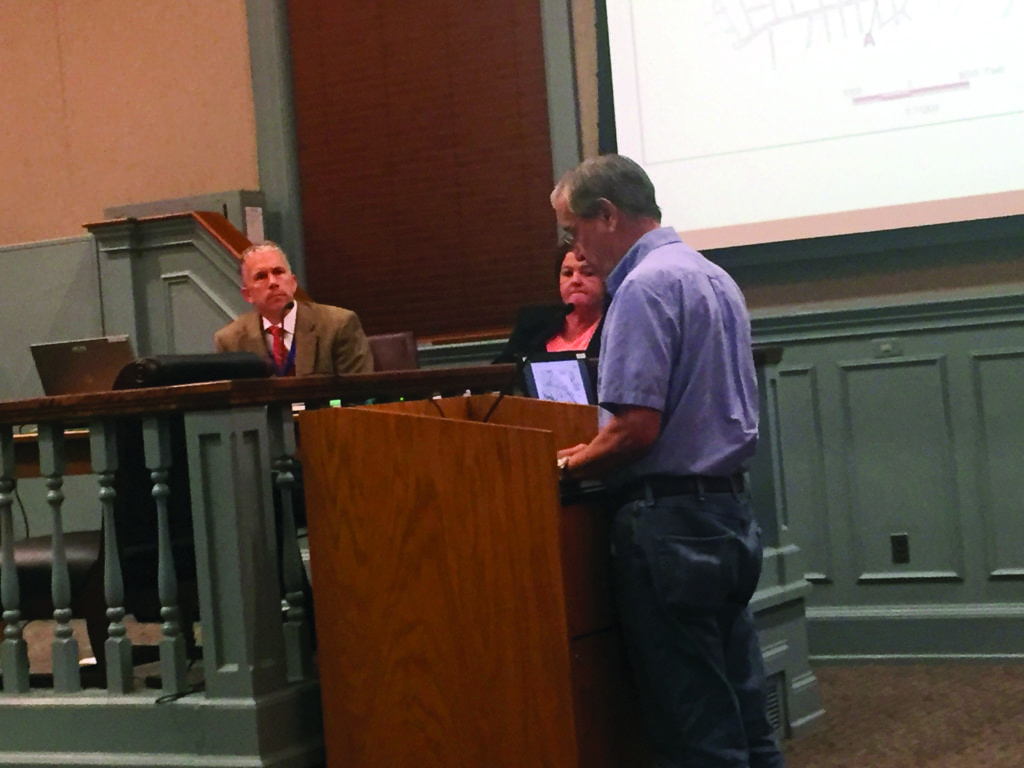 The motion, the second and the vote was accompanied by exactly no comment from any member of the Council, or the City staff for that matter.

It came just after a number of citizens with property adjacent the Fellows tract at 604 S. Oak protested the move on grounds that it would deter the ability of the Fellows family to subdivide and sell parcels of the property for residential uses, and that it would thereby hold the land for possible City action to impose “eminent domain” for purposes of expanding the Thomas Jefferson school footprint.

In addition to the reclassification from “low density residential” to “parks and open space,” the map of the property in the Comprehensive Plan was to add a school symbol to the site, and to depict it and the entire Thomas Jefferson property as “other parks and open space.”

The silence by the Council was interpreted by some as a form of acknowledgment of the truth of the claims by neighbors to the site.

John Transue, a resident adjacent the Fellows land for the last 50 years, and has known the single resident there, Betty Fellows, that whole time. “She has been a good neighbor,” he said. He claimed the change in the designation “indicates the City does not want this land developed.”

He explained, “This will place one more barrier in the path to development of this land and, in my opinion, make development impractical. How can you expect that a development loan can be obtained when the City has declared that it does not want the land developed?”

He noted that just recently, on June 20, the F.C. Planning Commission approved a rezoning of the Fellows land to permit its subdivision into seven single-family home units. But the redesignation “has everything to do with the City taking the land” because the action “is to make it impractical for the Fellows family to develop their private property.”

Another neighbor to the site, Transue’s next door neighbor Shirley Connuck, said, “The City has indicated that it is considering taking the Fellows property by eminent domain, land that has been in the family for nearly 100 years.” She added that there is talk the City might take other residential parcels, as well.

Any of those properties would be difficult to sell, she said. “Property values would go way down.” She added that if the Fellows tract was put to a school use that S. Oak Street would have to be closed to integrate the school campus.

In other developments at Monday’s Council business meeting:

The Council voted to bring its code into compliance with state code changes put into law this spring on towing of vehicles. It adjusted the current City code provision for towing companies to charge $100 for an involuntary tow to $135, plus $25 for towing at night or on weekends. In addition, in no event shall more than two such additional fees be charged for towing any vehicle, and no charge shall be made for storage and safekeeping for a period of 24 hours or less.

The Council voted to impose additional penalties on citizens failing to pay certain taxes on time, and an increase in bad check fees.

The Council concurred with the City attorney’s recommendation after a year of study not to adopt a code of conduct, but to modify the existing rules and proceedures of the Council to add the following: “Individual members of City government have the right to speak before government officials, agencies, courts and tribunals. When they do so, whether in person, in writing, or by electronic means, they speak as individuals and not on behalf of the City Council, unless authorized to do so by the City Council. As stated in the charter, the mayor is recognized as the head of the Council and may speak on behalf of the Council when authorized.”

The Council voted to amend the Comprehensive Plan to add “Revitalization Areas, Small Area Plans and Urban Development Areas” to enable it to accept proffers in these areas, as permitted “exemptions” in new state legislation restricting certain conditional rezoning proffers.