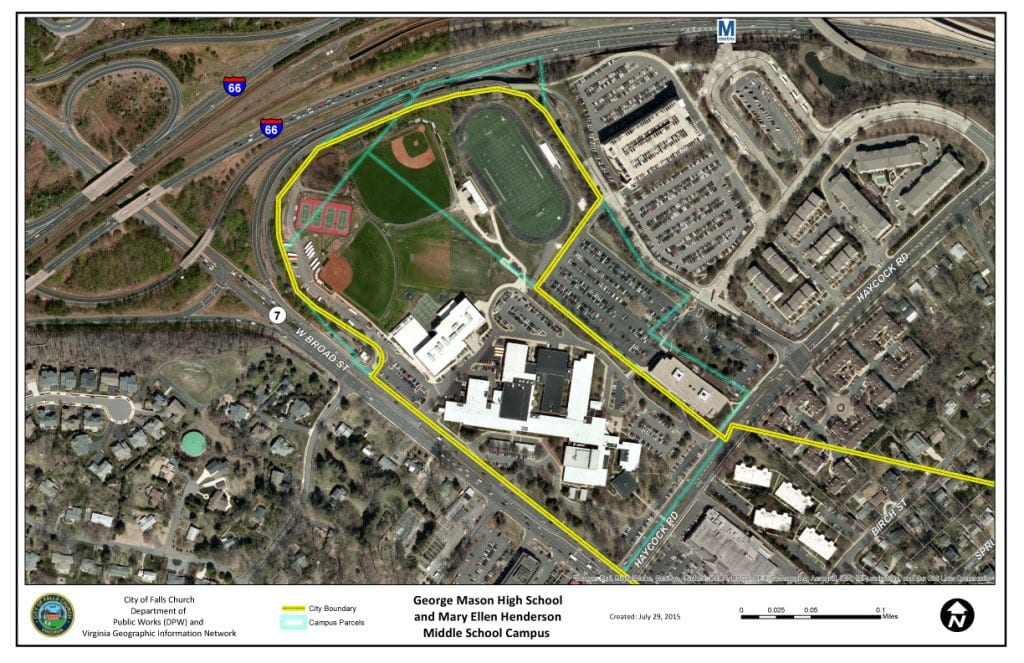 The Office of the City Manager of the City of Falls Church released Friday extensive non-confidential components of the two responses the City received to its request for proposal for the development of the 36-acre Upper West End property. The two bidding entities are Edgemoor Infrastructure of Bethesda, Maryland, including its leading contractor Clark Construction, and an entity going by Mason Greens Joint Venture, with the Republic Properties Corp. of Washington, D.C. as the major component.

Copies of both the more than 150-page submissions, their non-confidential components, are available on both the City’s and the City Schools’ website, and in hard copy at the Mary Riley Styles Public Library.

The Edgemoor team includes the same key team members that collaborated to complete the Mary Ellen Henderson Middle School as the first project awarded in Virginia to build an educational facility under the Public Private Education Act. “This project is incredibly important to our entire team as many of our key personnel are residents of Fall;s Church and have children who have attended or attend George Mason High School and Henderson Middle School,” an introductory letter from James Martin – a George Mason High School Class of ’81 alum – states. Clark, the note adds, “will guaranty Edgemoor’s obligations for the project and will provide a single payment and performance bond for the school facility improvements.” It appears the submission is very similar to the one that Clark submitted unsolicited last year prior to the City’s and Schools’ decision to put the project out to bid.

The Mason Greens Joint Venture proposes, as the Edgemoor one does as well, “replacing and relocating the obsolete high school and expanding the middle school. It proposes to build a new high school on the western portion of the campus to “best avoid disruption to existing students’ educational experience while also delivering facilities more quickly and at lower cost.” Following the new high school construction, it says “the former high school site will be harvested for a mixed-use development.” The plan “intentionally incorporates playing fields, parks and open spaces as common elements (between the community and schools),” and the gymnasium and performing arts theater facilities are located and designed to foster community co-use after classroom hours.” It adds, “This approach recognizes that Falls Church’s greatest asset is its people.” It organizes the project’s buildings around a new George Mason soccer field and aquatics center, with mixed use buildings of five stories including diversified residential offerings…A final mixed use tower will be located on the north end of the campus between the schools campus and the West Falls Church Metro Station.”

It was announced this Friday afternoon that the Falls Church City Council and School Board will meet in a closed session at the Council chambers of City Hall Monday night at 7:30 p.m. to begin discussing the proposals prior to the Council’s open work session.