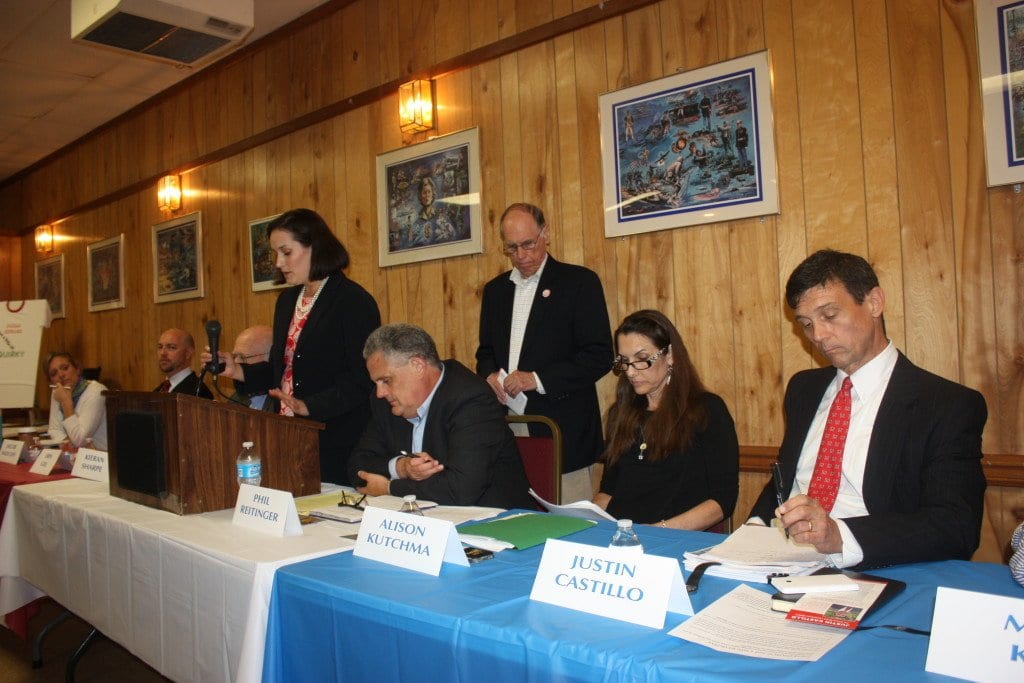 It was a standing room-only crowd that packed into the American Legion Hall on N. Oak Thursday night to hear 13 candidates seeking election on Nov. 3 to positions on the Falls Church City Council and School Board. Few left over the more than two hours of questions and answers. For the F.C. School Board, eight candidates squared off seeking three seats, and for the City Council five candidates, also seeking three seats, faced off.

Only three responses during the School Board portion addressed the controversial issue of the legal petition brought last week against the current School Board by first-time candidate Becky Smerdon, and otherwise the proceedings were civil, although largely due to the fact that one moderator, F.C. GOP committee chair Ken Feltman, held up a large wad of index card-sized questions he’d received from the audience to say that they were all on the nature of “have you beaten your wife lately and related themes,” and got the audience’s applause for his request to take them all and simply discard them.

Rival first-time School Board candidate Jacob Radcliff raised the issue of Smerdon’s legal action in response to a question specifically on the topic, calling the move “disruptive and wastes time.” He said that as a litigator he was sensitive to the negative cost-benefit elements of the action. Candidate Allison Kutchma soon after ignored a question directed to her to say that she was “very offended” by what Radcliff said, and called attention to issues of the new rules for volunteer committees that were at the heart of the legal action. Then Smerdon, herself, explained that she sought a legal interpretation from the Arlington Circuit Court because she was able to have “no conversations with the School Board,” and did it “as a last recourse.” She said, “I am doing this because I care about children and want the system to give them the very best.” 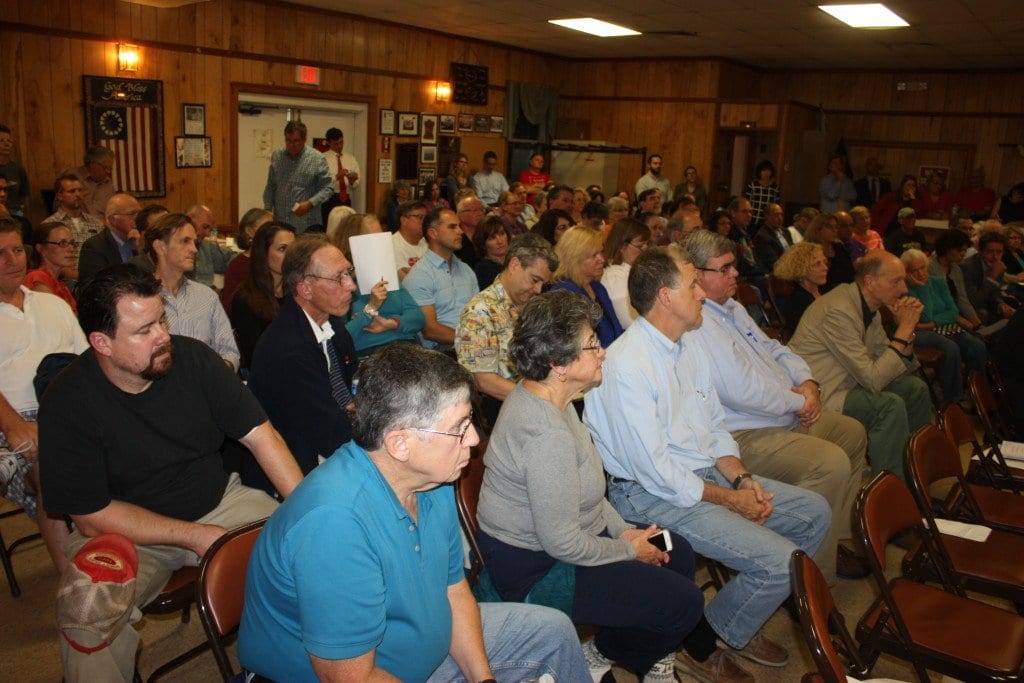 Incumbent Kieran Sharpe hailed the effectiveness of the school system, noting that it is now the first in the entire state to offer the inquiry-based, self-directed International Baccalaureate approach throughout the K-through-12 system. Incumbent board chair Justin Castillo said the key question is to ask, “Why are we all here?” He said there are benefits to a small school system “that you can’t put a price tag on.”

Kutchma joined Mark Kaye and Smerdon repeatedly assailing a “lack of transparency” in the school budget and decision making process. Kaye said he feared the new development of the Upper West End land would result in a “Tysons Three,” and said the current School Board “doesn’t have enough leadership.”

When asked “what is the single factor in the success of the Falls Church School System in the past 30 years,” candidate Philip Reitinger said, “Great teachers,” and ended his response with that. He also said the Schools should be ready with a “Plan B” if the Mt. Daniel expansion plan gets turned down next month by the Fairfax County Planning Commission. Candidate Erin Gill, with three children currently in the schools, agreed, saying she was disappointed by the unhappy development with Mt. Daniel. She said she was told, “We got bad advice,” when she asked School officials about how it happened. She stressed the importance of “individualization” in the educational process.

As expected, in the City Council portion of the evening, a lot of the debate centered on the merits of mixed-use development projects. Letty Hardi, the only one of the five candidates who is not currently or had previously served on the City Council, said that diversifying the tax base with mixed-use projects is key to keeping taxes low while providing quality education. She noted that 72 percent of the student enrollment growth in the City has come from single family homes, town homes, condominiums and apartments that were already here before six new mixed use projects began going up in the last decade. She also noted the burden on the City taxpayers comes from the fact that 38 percent of the households in the City have school aged children, whereas in neighboring Arlington, the percentage is half of that. Without development, she argued, taxes would go up much faster because new burdens on the schools will continue to come from the existing housing stock.

Former two-term Councilman Sam Mabry took the opposite tack, assailing the lack of adequate parking at the new projects and called for revising the “special exception” ordinance that permits for new mixed-use developments by allowing any four vote majority on the Council to waive requirements, such as parking requirements, to make a deal with a developer. He called it in its current form a “loop hole ordinance.”

Candidate Johannah Barry, also a former Council member, said that a new model to evaluate the mixed use proposals needs to be developed instead of the one that is now used. She said it should be a “economic, not a fiscal, model” to take into account the total impact of a project, and not simply the tax revenues it will generate.

Incumbent Phil Duncan said that “we need to be very careful to invite all to Falls Church” and to diversity the housing stock. The new housing coming from the 301 W. Broad and Tinner Hill projects now under construction will cater more to millennials, young couples with smaller studios and one bedroom options, he said.

Incumbent Mayor David Tarter said the City must become “an inviting place” for new commercial development to come in, and that it needs a “more walkable downtown, with sidewalks, crosswalks, and adequate parking. I see Falls Church having a very bright future,” he said.