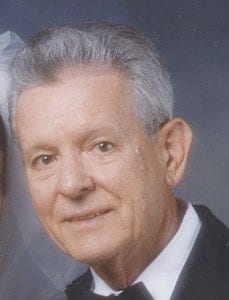 Longtime Falls Church resident Eli M. Ugljesa, 89, died on August 8 in Wyandotte, Michigan where he resided for the last 10 years. He lived in the Washington, D.C. metropolitan area for most of his life and lived in Falls Church for 42 years.

Ugljesa is survived by his son, Dennis Paul (Alice) and his grandchildren Michael (Mimi) and Tricia (Patrick) Mastrogiacomo and his great-grandchildren Anthony, James, Thomas, Alexander, John and Mary. He was preceded in death by Rosella, his wife of 44 years and his brothers Milan and Charles. Ugljesa was a veteran of the Navy, an avid golfer, a member of the Knights of Columbus and very active at Our Lady of Good Counsel in Vienna.

A funeral mass will be held this Thursday, August 14, 10:30 a.m. at Our Lady of Good Counsel at 8601 Wolftrap Road in Vienna. The wake will start at 9:30 a.m. Internment with military honors at Fairfax Memorial Park at 9900 Braddock Road in Fairfax.

Funeral arrangements made in Virginia were by Miller Funeral Home in Woodbridge.