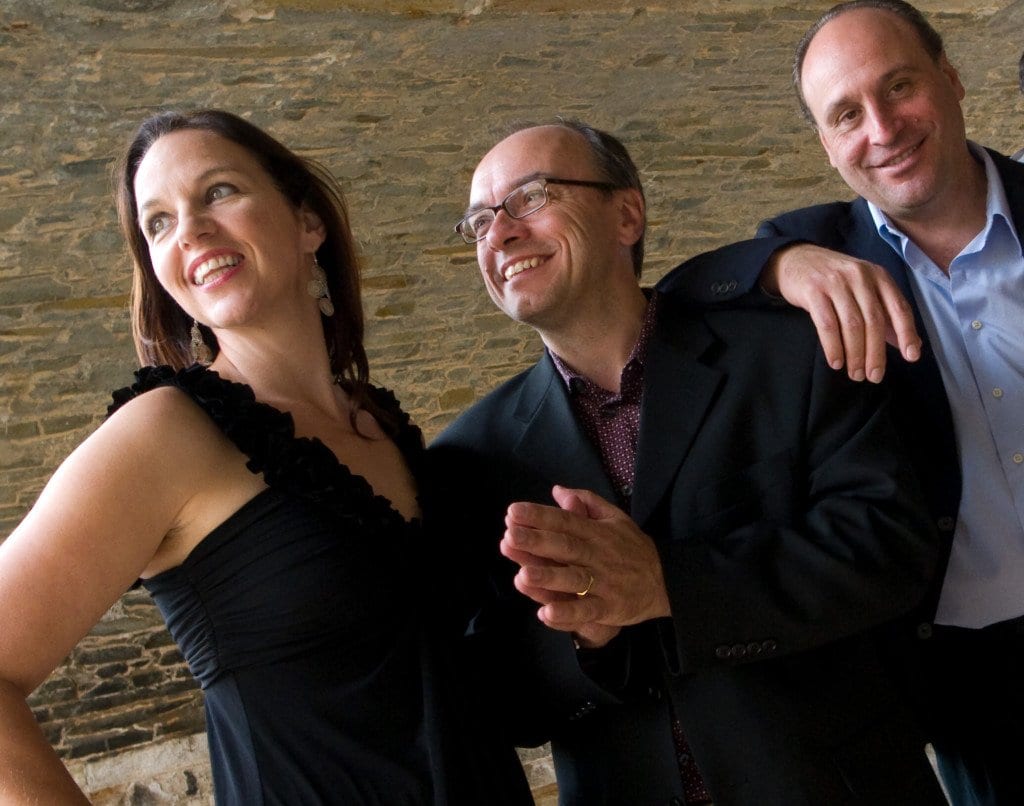 The jazz group Veronneau has played venues such as the Kennedy Center, the Strathmore, and Blues Alley. They’ve played at international embassies in the District. Later this month, they’ll be embarking on a tour of the United Kingdom, where they’ll again play live on the BBC. But before they head overseas, the last chance local audiences will get to see the Arlington-based, multi-Wammie-winning group will be an intimate concert right in Cherry Hill Park, held next Thursday as part of the City of Falls Church’s Concerts in the Park series.

“It’s always fun to play outdoors and to bring the music to the people,” says Lynn Véronneau, the Quebecoise chanteuse at the front of the namesake group. “I know it sounds clichéd, but it is fun and it’s a completely different energy.” Her husband, guitarist and UK native Ken Avis, agrees. The pressure’s on at the bigger venues, he says, but at festival shows the band can relax while sharing their internationally influenced jazz music.

The group formed only a few years ago, in the winter of 2010. Véronneau describes it as a catalytic moment when she met guitarist David Rosenblatt. They all hailed from different parts of the globe, and went on to live in even further stretches of the world. Their musical influences and experience were many, and diverse, and yet when Véronneau heard him play, she heard the sound she wanted to make.

“I think it comes together in the most unexpected way, but in the easiest way possible,” Véronneau says. “We all have, fundamentally, a lot of elements that unify us. We all have this love of jazz and this love of international influences. But then we bring them into the mix with openmindedness. We just want to see what’s out there, what between us we can mesh together and create.”

By January 2011, they were playing their first show. By March of that year, they were in the studio recording what would become their debut album, Joie de Vivre, their take on standards from around the world in styles as widely ranging – the gypsy jazz of France, the bossa nova of Brazil, and more. Their follow-up, 2012’s Jazz Samba Project, focused more closely on bossa nova sounds. It was released to honor the 50th anniversary of the Jazz Samba album by jazz greats Stan Getz and Charlie Byrd. That album, recorded in Washington, D.C., is credited with bossa nova’s rise to popularity with American audiences. In the Veronneau album was the seed of another project that is now coming to fruition.

The group set out to make a short promotional video for Jazz Samba Project. The video project grew as more people familiar with the 1962 Jazz Samba album and its creators took interest. What was originally intended to be a five-minute promo turned into the documentary “Bossa Nova: The Music Which Seduced the World,” a film that debuted last month to back-to-back sold-out screenings at the Strathmore as part of its Brazilian music festival.

Though in the early stages of the process, Veronneau is thinking about a third album as a showcase of their range – to avoid being tied exclusively to the bossa nova music that’s brought them acclaim in the past couple of years, to record some original material, and to experiment with the broader instrumentation.

“The one thing we know, at the moment, is that it will be very different from the last one.” Avis says. “We’ve really got our ears open at the moment.”

“I think what we want to do is really take where we are, and think of where we want to go, and just explore what we have to offer,” Véronneau says.