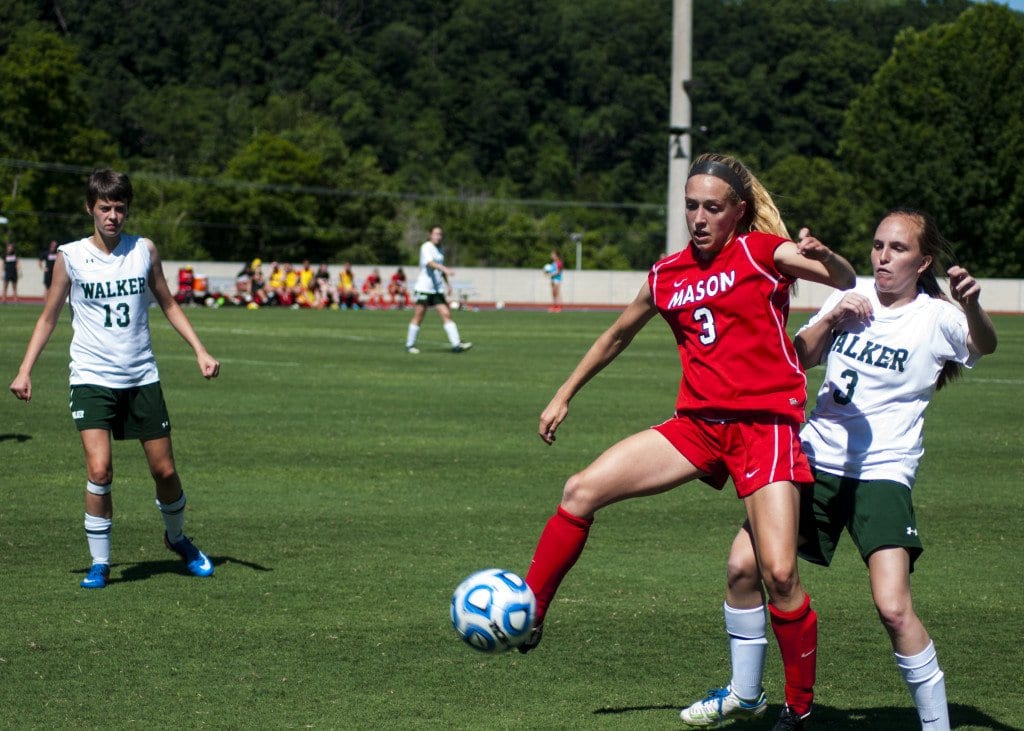 George Mason Head Coach Jennifer Parsons said the 2014 team differs from previous teams because of how close the players are with one another.

“I’m so impressed by this group because I would say out of the eight years I’ve been here they’re definitely the closest knit team from the freshman to the seniors, and I think that makes the team very unique,” Parsons said. “We’ve always been close before, but there’s something definitely special about this group.”

The Mustangs outscored their opponents 190-8 and broke the VHSL girls soccer record for average goals scored per game by averaging 7.92 goals during their 2014 campaign. The previous record of 7.35 goals was held by Radford High School’s 2009 varsity girls soccer team.

But their most competitive opponents this season were the Maggie Walker Green Dragons. The Mustangs outscored their opponents 63-2 during the 2014 postseason – the Green Dragons were the only team to score against them. George Mason senior midfielder Claire Trevisan said the tough competition was added motivation.

“I think it was definitely very stressful, but we kind of thrive off that pressure and we’ve always had that pressure because we want to keep the legacy going,” Trevisan said.

The Mustangs and the Green Dragons nearly played to a scoreless first half, but George Mason junior midfielder/forward Ava Roth scored an unassisted goal with a little over a minute left in the period to put the Mustangs ahead 1-0.

“That was a crusher,” said David Hillgrove, Maggie Walker’s assistant coach. “You never want to lose a goal in the final two minutes.”

According to Parsons, Roth, and Trevisan, the Mustangs spoke at halftime about the urgency to score another goal against a tough opponent like the Green Dragons. That sense of urgency led Roth to score her second goal of the match in the 43rd minute – a behind-the-back tap from the top of the goal box that sputtered across the goal line to put the Mustangs ahead 2-0. Trevisan was awarded the assist on the goal.

“It was coming from a corner [kick] so I knew we needed to put it away. We only had one goal ahead of them and really 1-0 is not a good enough lead for us, or for any team for that matter,” Roth said.

The last 10 minutes of the match were played mostly on the Mustangs’ defensive half of the field as the Green Dragons threatened to mount a comeback. Maggie Walker freshman forward Sabrina Daglish scored the Green Dragons’ lone goal in the 75th minute to put her team back in competition with a 2-1 score, but the Mustangs held their opponents off for the remainder of the match.

The Mustangs beat Graham High School 10-0 the day before to advance to the state final. Trevisan scored a hat trick and had two assists against the Graham G-Girls, including a score 25 seconds into the match. Roth and senior defender Erica Schneider both scored two goals in the match. Senior midfielder Camille Rice, sophomore forward/midfielder Corinne Carson and sophomore midfielder Kate Mills each added a goal to the Mustangs’ tally.

Rice, Mills, Carson, and freshman forward Rebecca Crouch each had an assist in the match.