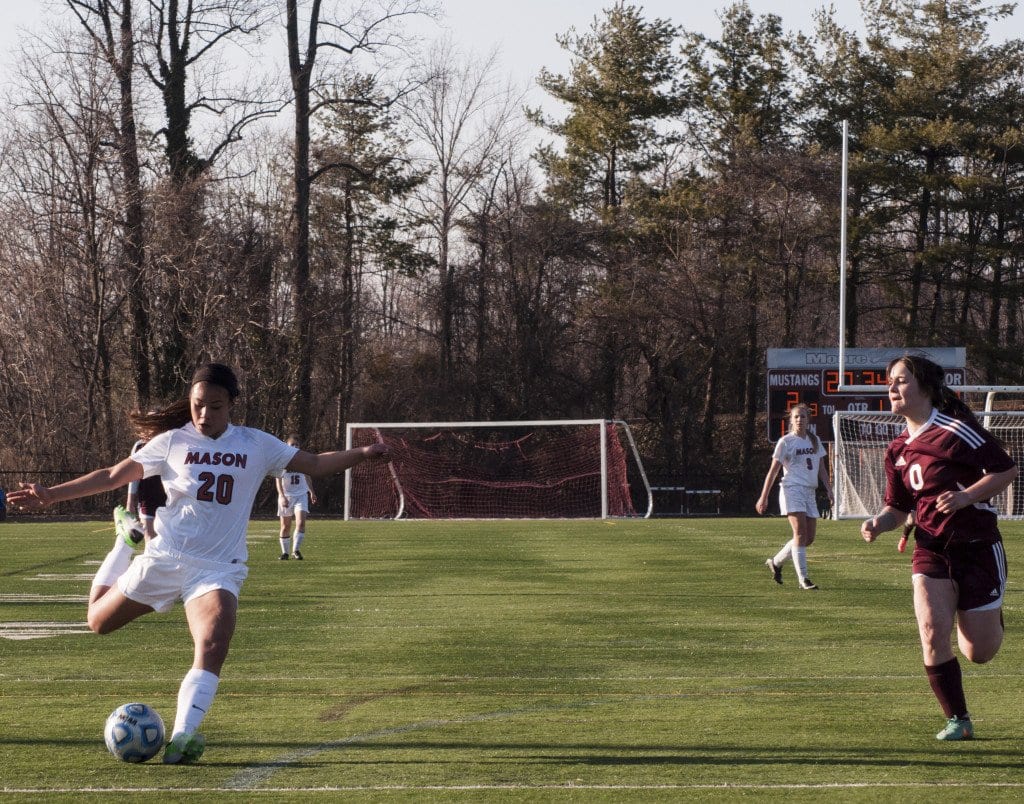 Both games ended early because of the Virginia High School League’s mercy rule for soccer, which states that a team automatically wins a game if the team is up by eight goals after 60 minutes of a game has been played.

George Mason Head Coach Jennifer Parsons said the Mustangs came out hard against the Warren County Wildcats (1-1,1-1), which is what they wanted to do in order to set the tone of the game.

“I was happy with how we played, especially for the first game,” Parsons said.

Junior midfielder/forward Ava Roth scored the first goal of the game after the Mustangs’ first corner kick was deflected to her in the sixth minute.

“I think we started off really strong. I think it was a great way to start the season,” Roth said. “I thought we moved the ball really well and we were able to click.”

Sophomore midfielder/defender Corinne Carson started a scoring run for the Mustangs in the 10th minute. Five minutes after Carson scored, freshman forward Rebecca Crouch scored with a powerful kick that bounced off of the hands of Warren County junior goalkeeper Abbey O’Mara and into the goal.

Roth rounded out the run with a goal in the 18th minute on an assist from senior midfielder/forward Claire Trevisan. The Mustangs ended the first half up 4-0.

Carson and Crouch each scored two more goals in the second half. Carson’s goals came in the 48th and 51st minutes and Crouch’s came in the 61st and 62nd minutes.

The next day, the Mustangs got out to a swift start with three goals in the first 10 minutes of regulation against the Madison County Mountaineers (1-1, 1-1). Roth scored the first goal of the game in the fourth minute and Crouch scored the next two goals in the eighth and ninth minutes.

Trevisan scored her first goal of the season in the 17th minute to put the Mustangs ahead 4-0. She scored two more goals against the Mountaineers – one in the 25th minute and another in the 30th minute.

“It was kind of an interesting game since we had so many goals pretty quickly,” Trevisan said. “But it allowed us to kind of step back and work on possession instead of always getting forward, so that was good.”

“These guys are the state champions and they showed it tonight,” said Madison County Head Coach Bruce Parker.

The Mustangs scored two more goals in the first half. Carson scored in the 33rd minute and junior midfielder Jessica Gemond scored the team’s final goal of the game in the 38th minute. Sophomore midfielder Ella Howard scored in the 29th minute during the Mustangs’ scoring run.