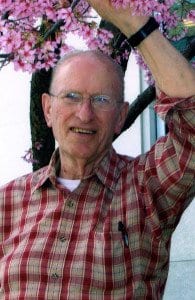 Bob was born Jan. 21, 1935, in Middletown, New York, the son of Edward C. and Geraldine Witt. At age 12, Bob was fascinated by the talent of a local store window trimmer and decided that would be his future.

In high school he studied 13 types of art media. After graduation from Middletown High School, he attended evening classes at the National Display Institute in Philadelphia. During the day, he worked at a local department store (Strawbridge and Clothier) as a helper to the women’s fashion trimmer and also worked at the Blum Store.

Bob’s first job was with Peck and Peck as its area display director, with nine stores in the Philadelphia, Baltimore, and Washington, D.C. areas. Photos of his work were used by a national service to show other trimmers ideas for displays. His Easter window display was entered into an international competition.

Bob then moved to Baltimore and headed the display department for Oppenheim Collins, a women’s specialty chain. He also worked for Stewart’s department store and was responsible for the merchandise presentation for its Reisterstown location. He was a member of the Baltimore Opera props crew and chaired the department for several seasons.

He enjoyed 32 years of window display, his last employment being with Lane Bryant stores for 17 years, where he trimmed windows from Harrisburg, Pennsylvania, to Birmingham, Alabama.

Bob’s photography works are a visual example of his creativity. As in display, he learned that you look at something not for what it is, but for what it could be.

His photo works have been shown at the Labor Day Art Show in the Glen Echo Park Ballroom, A Show of Hands art gallery in Del Ray, and the Burke and Herbert Bank on Broad Street in Falls Church. He also had a one-man show at The Yellow Barn Gallery and Studio in Glen Echo, Maryland, where he showed more than 40 pieces of his photography.

Bob was a past governor of the Rockville Moose Lodge.