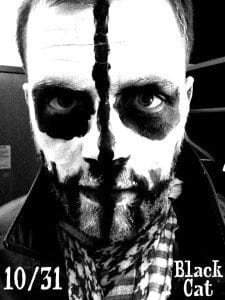 As a child growing up in Silver Spring, there were two attractions that caught bluesman Jonny Grave’s attention. One was the Ringling Bros. and Barnum and Bailey Circus, a stalwart source of wonder for fun-seekers young and old.

The other was a less universally recognized amusement. It was a house on his block that would transform for Halloween. It was covered in fake cobwebs, with gravestones littering the front yard, all lit with strobe lights. There, one could hear the spooky sounds of Halloween inspired by classic horror movies, the screeching violins and the ominous pipe organs.

Grave felt it only natural to combine the two for an evening of entertainment. Thus, the Halloween Circus was born.

“It embodies everything that a good circus and a good Halloween party can offer, and a lot more too,” Grave said.

On Halloween night, revelers 21 and older who visit the Black Cat can see Grave (as Jonny Grave and The Tombstones) perform with Americana rockers Miss Shevaughn and Yuma Wray and the country-blues act Sean K. Preston and The Loaded Pistols. The three bands will be joined by burlesque performers Gigi Holliday and Cherie Sweetbottom, and sideshow acts by Moloch’s Midway – think lying on beds of nails, sword-swallowing, and fire-breathing.

A similar event Grave played earlier this year featuring music, burlesque, and sideshows, the Mardi Gras Carnival, sold out, but tickets are still on sale for Thursday’s event.

“It’s unbridled sensory overload. It’s non-stop entertainment,” Grave said of the pairing of Halloween and circus acts. “It’s one thing after another. It’s costumes and extravagance and a little bit of horror – excitement, adventure, and all these incredible, cool things that people choose to be entertained by.”

Halloween gives the blues performer a chance to highlight the occult aspects of his musical tradition – not just the well-traveled fables, like the story of bluesman Robert Johnson selling his soul to the devil for guitar gifts, but lesser-known stories like those of Mississippi Fred McDowell, featuring tiny evil creatures and mystical mojo hands.

The spooky fall holiday does have a way of getting to the unseen truth, Grave says, calling upon the popular quotation by comic artist Zac Gorman: “On Halloween, we take our costumes off, and you can see us as we see ourselves.”

Beyond that healthy bit of abandon the holiday offers, Grave hopes his show will give audiences a few scares, the opportunity to dance, and a special blend of dark thrills.

“I want to give them something they haven’t seen before,” Grave said.