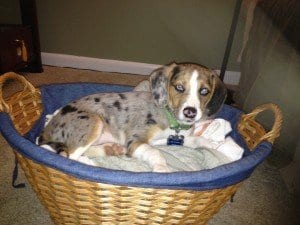 Flynn (named for author Vince Flynn) became one of Falls Church City’s newest residents when he was adopted June 28 from the Lost Dog and Cat Rescue Foundation. Since then he has become a popular member of the Little City, constantly attracting attention from passersby who like to stop to meet him. His unique markings – Merle with ice-blue eyes – make him easy to notice. And what kind of dog is he (a question commonly asked)? He is half Australian Shepard and half Hound Dog). City residents may have seen him hanging out in town, as he loves to go to Tuesday Tap Night at Mad Fox Brewery and for yogurt at Sweet Frog. He loves attention and meeting new people, and as a puppy he has a lot of energy to waste. So he loves being able to walk to all of these places and more around Falls Church. This does not always bode well for his older sister, 14-year-old Missy, who is still getting used to having him around and often bats his playfulness away. But he’s such a happy dog that his owners say you can’t help but love him.