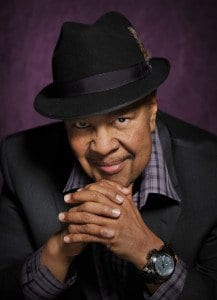 Update: George Duke passed away Aug. 5. He was 67 years old.

A legacy as a keyboard trailblazer. A nearly 50-year career in recording. Producing credits for Grammy-winning artists. A record label all his own. There were plenty of reasons for jazz great George Duke to keep going, but the death of his wife stopped him in his tracks.

“She was my partner. Not behind me, but beside me,” Duke said of Corine, who passed away last summer. “She was a wonderful woman who took care of not only the home, but took care of the office. And that’s what she wanted to do.”

And it was a long time before Duke could return to recording music.

“I just could not go into the studio and make a note. I could not make a note,” Duke said. “I passed by the studio for months, and I’d just look in there and say ‘not today.’ But I finally got in there.”

His description of the moment he was able to break through is almost mystical. He was on a jazz cruise, and stepped out onto the deck to take in the sunrise. It wasn’t his intent to contemplate music in that moment, but as the sun came up his mind filled with lyrics and melodies. The first four songs of the album were written soon after.

DreamWeaver debuted on July 16, and moved to the top spot on the Amazon and iTunes jazz charts in the week that followed.

Duke says it’s an important album to him for the impact of losing his wife, an album a long time in the making that saw the seasoned musician embrace the comfort of old friends and old instruments in his time of grief. He says it might have been his therapy, playing the dated analog instruments, some of which he’d had owned since he first started out back in the ’60s as a jazz fusion artist.

“They have a personality that’s close to me, so I think in many ways that’s kind of unique to what I do, so I decided to go back to that,” Duke said. “Not only the instruments, but including a lot of the musicians I’ve grown up with over the years and have loved to work with. It was a comfort factor, especially with this album.”

Those artists include bassists Stanley Clarke and Christian McBride and singers Jeffrey Osborne and Lalah Hathaway.

Duke says his wife’s influence can be heard in the lyrics of this album, and spoke of the smooth R&B ballad “Missing You” as his ode to his wife. “Girl, I’ve been missing you,” is the song’s tender refrain.

Duke will be at The Birchmere Aug. 13 for a storyteller event, where audience members will have the opportunity to hear more about the current album from its creator’s perspective and asks questions about DreamWeaver and other works from Duke’s long career.

Later this month he’ll also kick off a tour in support of the album, bringing the songs that nearly weren’t, the music he made in the wake of his wife’s passing, to the stage for the first time.