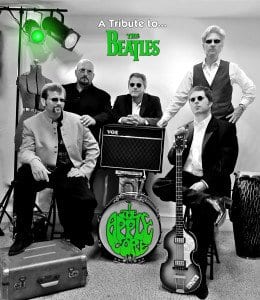 “I think the audience is going to appreciate music that they’re familiar with, that’s fun, that they can sing along with, that they can dance to, and the band prides itself on very, very exacting but also energetic live versions of the recorded songs,” Ratliff said.

It’s in that focus on the recorded songs that Ratliff says distinguishes his band from other Beatles-inspired acts.

“We’re not wearing the costumes, we’re not assuming the roles of the individual Beatles, and we’re not doing the Liverpudlian accents,” Ratliff said. It just wasn’t something he and his band mates were interested in. On the stage, they are not John, Paul, George, and Ringo. They are Mike Dutton, Mark Owens, Eric Schlam, Andrew Ratliff, and Mark Lindamood, and they want to share the music of The Beatles in the best way they can.

Between the five musicians, they determine whose vocal and instrumental talents would be best suited for each song. For example, Ratliff often finds himself singing the Paul McCartney vocals, but he sings John Lennon’s parts sometimes and also plays percussion for the band.

“We play to our strengths, what we can deliver best in order to replicate the music with the right level of energy,” Ratliff said. “If we were to assume very strict roles, then we wouldn’t be able to do that.”

When it comes to replicating the music of The Beatles, The Apple Core has no dearth of material. From their formation in 1960 to their breakup in 1970, The Beatles released a dozen records that perennially find themselves listed among the greatest albums of all time. And there’s variety in the catalog of a band that was always transforming; from making the teenybopper pop hits that inspired Beatlemania and catapulted the band to international fame, they grew to produce more sophisticated music and experiment with their sound.

“We really give the audience a broader taste of what The Beatles represented, from the danceable pop music with simplistic lyrics, up to the more psychedelic, harder-rocking material,” Ratliff said.

The diversity of the Beatles catalog is what cemented Ratliff’s decision to join the group in May 2010. The group made its debut performance at JV’s Restaurant in January 2010, and asked Ratliff to join that summer. He was then part of a local cover band that performed music from the ’50s up to the present day, and he felt that focusing solely on one artist would be quite a change. But The Beatles, Ratliff says, are the most popular band there ever was, and their music is fun to play. He’s a fan, and so are his band mates, all D.C.-area musicians who grew up listening to The Beatles and, when not working their professional “day jobs,” can be found in local bars playing the music they’ve studied and worked to recreate.

Beyond performing the music, they impart what they’ve learned about The Beatles, interspersing songs with Beatles factoids and some context about how a particular song came to be. Audiences can count on hearing the best known Beatles tracks, from their early numbers like “Twist and Shout” that fill the dance floor to later hits like “Come Together,” but the band will also play deeper album cuts and rarities, some of which have only resurfaced recently. It’s their way to entertain with and also teach about the music they’re passionate about.

“We are carrying the torch,” Ratliff said.

• For more information about The Apple Core, visit reverbnation.com/theapplecore.