Pimmit Hills resident James Quinn was in agony at many points during his 13-hour, 100-kilometer run from Harpers Ferry, West Virginia, to Washington, D.C. Although a seasoned runner and triathlete, the run he undertook on June 8 taxed his body in ways he’d never before experienced.

His body was stiff and sore. His knees, hip flexors, and quadriceps ached. The hunger and thirst he felt was unlike any he’d felt before. He thought his legs would give out. He felt he was on the very brink of injury.

There were many points along the route that he wanted to stop running. He could have, and easily – his wife Alyson, with their 1-year-old son Brendan, was driving the route and meeting up with him every few miles to provide him with food and water. But the purpose of this run was too great.

James’ younger brother, Geoff, was diagnosed with Stage-IV Malignant Peripheral Neural Sheath Tumor in November 2010. This rare type of sarcoma affects the tissue that surrounds nerves, and in Geoff’s case had developed in his brain stem and spread to different parts of his body. He was given three months to live. It’s now nearly three years after the diagnosis, and Geoff’s cancer battle continues. He’s undergone radiation and chemotheraphy, as well as less common approaches to treating cancer.

“We don’t believe we’ve exhausted all of the treatments available, and we’re constantly looking to alternative treatments, things that haven’t been tried,” James said.

Geoff’s medical costs are great, and that burden inspired his older brother’s 62-mile run. Through the Facebook page Run for Geoff, James has shared Geoff’s story and solicited donations for his treatment through the run. His goal was to raise $25,000, but James has collected more than $38,000, and plans to continue fundraising to offset the cost of his brother’s treatment.

“We’ve well exceeded our goal and we’re not stopping there,” James said. “This kind of treatment is very, very expensive, and Geoff’s condition is very serious. We need all the funding we can get.”

Thinking about Geoff kept James running. While James knows that he’ll never fully comprehend the pain Geoff has endured during his struggle with cancer, he wanted to approach that pain by running in order to gain an understanding of what Geoff must go through.

“I’ve always known that my husband is a determined guy,” Alyson said. “When he sets his mind to something, he gets there, no matter how long it takes! And he is incredibly devoted to family, so it’s only natural that he would undertake something like this out of love for his younger brother.”

James also prayed throughout his run.

“Both Geoff and I, we have a very close relationship with God,” James said. “That’s something that’s really who we are. That’s one of the things that really kept me motivated during the run and encouraged, was my faith in God and that he’s going to get me through to the end.”

Geoff was in seminary in the Boston area when he learned of his diagnosis. He has had to suspend his studies, but even in his weakened state has found the strength to preach.

“He is a great man of faith, and it has been inspiring to witness how strong he has been in his faith, and it’s been tested so incredibly,” James said. “He’s come down with cancer. I think that’s something that’s really inspired a lot of people, is how he can continue to believe in God despite all he has been through. But his faith is stronger than ever.” 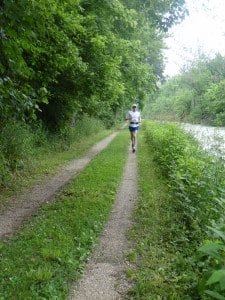 The story has inspired not just those close to the Quinn family, but complete strangers too as word of Geoff’s cancer battle and James’ run of support has spread. Through a chance encounter before the run with a Harpers Ferry native locally, James was put in touch with runners he’d never met before who wanted to run the first few miles of the race with him, one of whom even joined James for the last leg.

“I’m so proud of him for doing this. Although our son is a little too young to understand everything, someday I’ll tell him stories about the run, and how heroic and loving his dad is,” Alyson said.

James says finishing the run was “exhilarating,” but stresses that the meaning of his undertaking is more important than the feat itself.

“I hope and I pray that he’ll make it through this, and that he’ll be able to realize his dream of completing his degree and entering into full-time ministry,” James said.