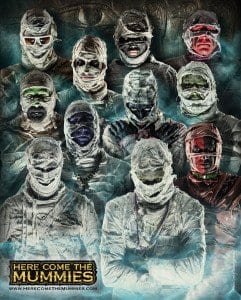 Conventional wisdom would suggest that the band members of the funk and R&B group Here Come the Mummies aren’t actually undead beings of ancient Egyptian origin as they claim. It’s been said that the band members are actually accomplished, even Grammy-winning, musicians who perform in disguise to sidestep contract issues.

But when you see the 13-piece outfit take the stage fully bandaged, guitars and brass in hand, you can’t help but appreciate their devotion to the act, suspend your disbelief, and let them take you on a funky, unearthly ride.

The News-Press posed a few questions to group member Java Mummy to learn more about the origins of Here Come the Mummies, the group’s newly released album Cryptic, and what’s in store for audience members at their show at The State Theatre next Thursday.

Our modern birth was as sudden as being pulled from the womb, just replace your doctor with a drunk, British blowhard. Douglas Nigel Dumlucke uncovered us while digging for Egyptian artifacts (we think to sell to support his wife’s habit). Despite a tough couple of years (think caveman lawyer), we are glad he did, for once we acclimated to current music styles, we found that audiences dug, the undead that Doug digged.

How have you developed your brand of funk and R&B?

It is a very scientific process, that involves the scrutiny of the gyration of female hips.

Considering your mysterious origins, there are rumors on the internet about the “true” identities of the band members. What are the wildest ones you have heard?

Some of our favorites include members of The Dave Matthews Band, Oingo Boingo, Elvis, and Rip Taylor! I mean really, Rip Taylor? Where would we hide that mustache?

What is it like having been a band for so long?

It is like being in any marriage that spans millennia, just without the occasional sex and birthday dinners.

I understand that the band members are cursed into an undead existence until you can find the perfect riff. What is the perfect riff, and what will happen after you find it?

Great question, and one we are uncertain we want to discover.

What three things would you like music lovers who have never heard of Here Come the Mummies to know about your group?

That we sound better than we look and smell, that we are not trustworthy around any woman between 18 and 98, and that we are formidable Scrabble opponents.

Why did you take to Kickstarter for funding for Cryptic, and how does the band feel about the support received there?

We live beneath a world-class recording studio, so making a record is easy. Promoting an album without a record company, however, is tough. It is quite expensive and daunting. KickStarter proved to be a great vehicle for bringing those with the means and interest into promotion enablers.

What do you think fans will appreciate most about Cryptic?

That it basically kicks ass. There are some really catchy and infectious tunes on it.

What can audiences expect from a Here Come the Mummies show at The State Theatre?

More fun than they have had in months with clothes on.

What’s next for Here Come the Mummies?

We are preparing for Mummy TV (we just finished preparation G).