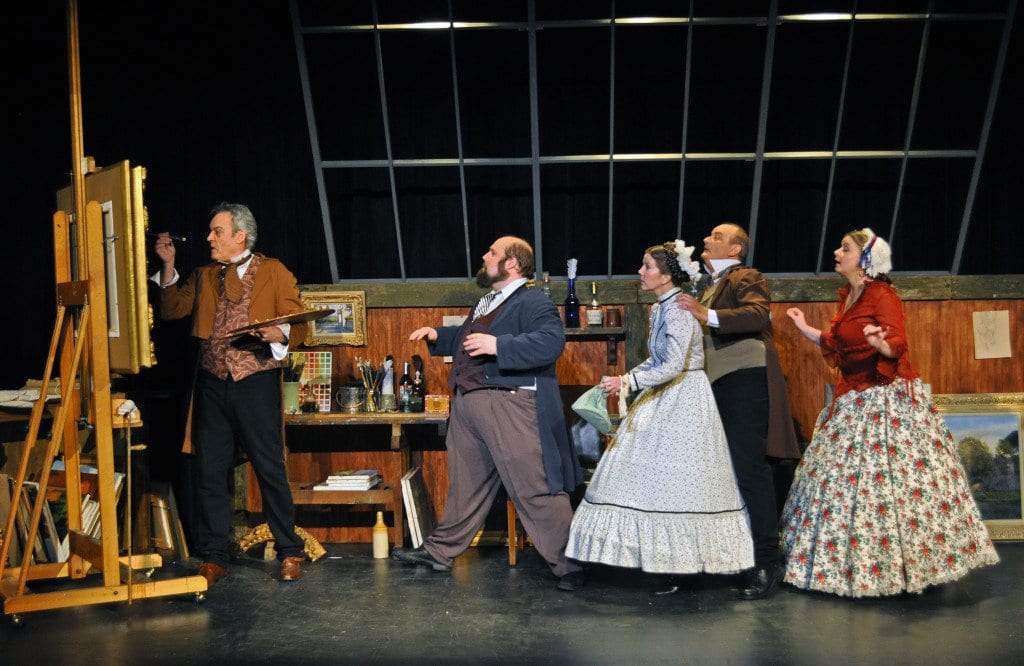 Nearly a century after Mark Twain’s death, a long undiscovered play by the legendary humorist revealed that Twain had plenty more laughs to deliver. This summer, the Falls Church area’s Providence Players will be bringing that recently uncovered work to the stage.

“Is He Dead?” was found by Twain scholar Shelley Fisher Fishkin within the deceased author’s papers and it was later published in 2003. Playwright David Ives adapted the play for a modern audience, and it debuted on Broadway in the winter of 2007.

Director Beth Hughes-Brown said the play made such an impression upon the Providence Players when they read it that they had to put it on.

“People just couldn’t stop laughing,” Hughes-Brown said. “It was just like, ‘OK, we have to do this now.’”

That humor comes from the farcical antics of a cross-dressing artist faking his own death to gain some fame and to make his paintings more profitable.

Jean-François Millet, a French painter and contemporary to Twain, is fictionalized as the lead in the play. Millet’s artist friends concoct a scheme to repay a greedy and underhanded art dealer to whom the group is indebted. The artists decide to fake Millet’s death, despite Millet’s protests, and disguise the artist to guard the secret that Millet is alive.

Enter Daisy Tillou, who is passed off as Millet’s widowed twin sister, but is actually the artist himself dressed and acting – not always convincingly – as a woman.

Millet and Tillou are played by Falls Church’s own Patrick David who, at a towering 6-foot-3 height, was not easy to costume as The Widow Tillou.

“With all of the, shall we say, accoutrements that I have to put on, it’s quite a spectacle,” David said, referencing the chest piece that gives the actor a more matronly shape as Tillou, among other pieces. “And it’s hot!” he adds with a laugh.

David was Hughes-Brown’s pick to play the lead role because of the humor he brought to his audition. The funniest person was going to be her Millet, Hughes-Brown said, and David was that actor. He went as far as he could with the comedy in his audition, and it’s been the strategy of the actor and director to go all-out with his comedic portrayal and only rein it in if need be.

Despite playing the character whose ruse raises the title’s question, David stresses that the play relies on the comedic talents of all of the actors working under Hughes-Brown’s direction.

“She is a director with impeccable comedic timing,” David said.

David is just one in a 16-person cast that both the actor and director praised for their comedic abilities.

“They play off of each other brilliantly,” Hughes-Brown said of the actors who play the four artists at the center of the deception. “They have a chemistry that is just a delight to work with. They’re so funny in rehearsals.” So funny, in fact, that Hughes-Brown says those involved with the show watch the rehearsal whenever they can and laugh throughout, which is to her a sign that the group has a hit on its hands.

The play will close the Providence Players’ 15th anniversary season, and its director hopes that “Is He Dead?” ends the season with a laugh – because she says that’s just what the D.C. area needs.

“I love it when people laugh at my stuff,” Hughes-Brown said. “My day job is stressful and when I have an opportunity to do for others what works for me – which is a good belly laugh – for the stressed-out population of Northern Virginia and D.C., it’s a real gift.”

“Is He Dead?” runs May 31 – June 15. Performances are scheduled for 7:30 p.m. on Thursdays, Fridays, and Saturdays, with Sunday matinees at 2 p.m. on June 2 and 9. The play will be performed at The James Lee Community Center Theater, 2855 Annandale Road, Falls Church. Tickets are $18 for general admission and $15 for students and seniors. For more information, visit providenceplayers.org or call 703-425-6782.