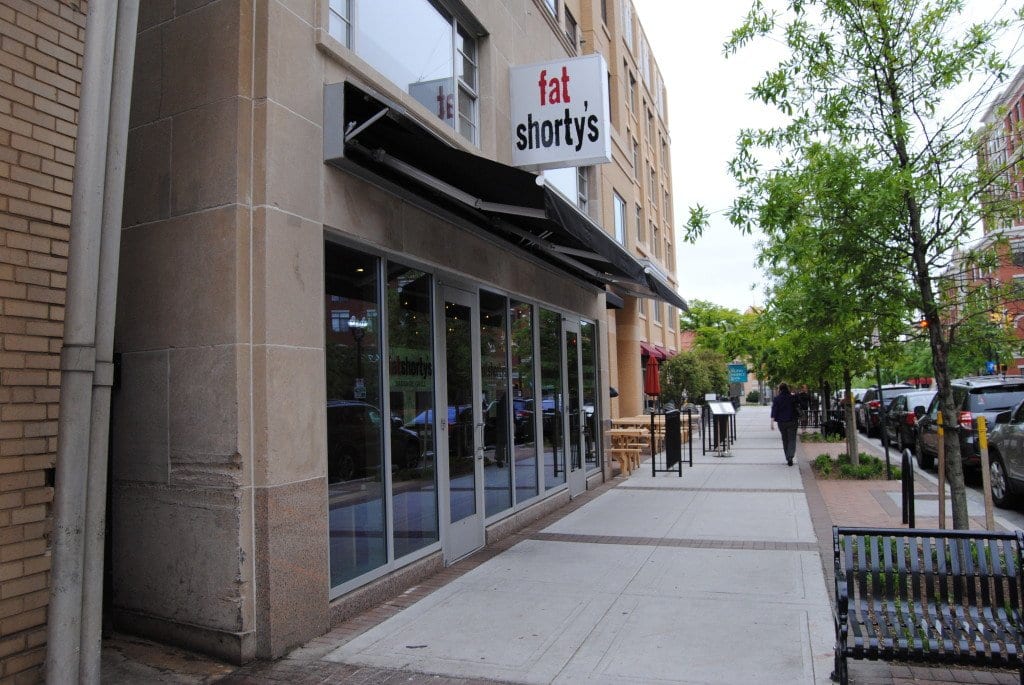 Fat Shorty’s made its debut last month, bringing the favorite cook-out fare of grilled sausages and beer to Clarendon just as warmer weather was approaching. But the new restaurant is more than brats and Buds. Fat Shorty’s has several different varieties of sausages (even some that use uncommon meats like alligator and rattlesnake) as well as Belgian and German beers on tap in standard and jumbo 23-ounce sizes.

This spot was once home to Rabbit Salad and Grill, a fast-casual restaurant focused on quick and healthy eats. But owner Aaron Gordon flipped the format, teaming up with Chef Rock Harper of “Hell’s Kitchen” fame to make a restaurant modeled on European beer gardens.

Patio seating is offered outside, and inside big, wooden picnic-style tables and benches run the length of the dining room, each with a communal caddy of silverware and napkins and a half-dozen condiment bottles. A sign bearing the restaurant’s name in lit mismatched lettering looks fresh from a carnival midway. Above a long bar where orders are placed and prepared is mounted a row of antique meat grinders, which wink at the carnivorous delights to come.

Chalkboards around the cash register list the available food and beer. The sausage sandwiches, at about 20 in all, are divided into three categories: Classic ($6.50), Gourmet ($7.50), and Exotic ($8.50).

The “classic” selection features more familiar sausages, like chorizo and three different takes on Italian sausage (hot, sweet, and – surprisingly enough for this meat-focused spot – vegan). The Bratwurst is a classic German sausage, and the Fat Shorty’s take doesn’t disappoint, as a firm snap of its casing reveals juicy, savory meat beneath.

The concept gets dressed up in the “gourmet” selection, and includes an assortment of European sausages that haven’t yet gained the bratwurst’s international appeal. Among them the Kaserkriner has become a house favorite, and when a sausage is made with bacon and gruyere cheese, what’s not to love?

But the sausages that had local foodies buzzing about this spot weeks before its opening are the “exotic” ones. On the tamer end of the exotic spectrum are the Buffalo Chipotle and the Rabbit/Veal and White Wine. Both get a boost from their supporting flavors, the former with its smoky chipotle seasoning and the latter with a just hint of the wine against a savory backdrop. But there are also picks like the Rattlesnake, combined with rabbit and pork and speckled with jalapeno to give it a peppery kick.

Each sausage sandwich comes with the choice of two of four available toppings. The sweet pepper strips are a nice, colorful topping that offer a little bit of heat despite the name. For a firey topping, diners can add the hot peppers to their sausage and get bits of the limp pepper and dangerous seeds. The sauerkraut is not too sour, and the grilled onion is sweet, but both bring a nice crunchy texture to the sausage.

The grilled bun at Fat Shorty’s is ideal for serving these meaty creations. It’s a huge bun, but chewy past its firm outer layer, and it holds up against toppings, condiments, and those juicy sausages.

But diners can skip the bread and order a sausage platter ($10 for one sausage, $14 for two), which comes with the choice of baked beans, German-style potato salad, or field green salad. Those dishes can be ordered for $2 apiece as well, and French fries are also offered as a side ($3 for a small, $5 for a large). The fries are thick-cut and soft, but crisp at their potato-skinned edges. And with several condiments at the table (many mustards, and a sweet and sour mumbo sauce), the fries aren’t lacking for dip.

Whether diners wish to stick with more common pork and beef or embrace the novelty of game meat, Fat Shorty’s will be a crowd-pleaser for offering fast, cheap, and delicious food. And those giant beers won’t hurt.