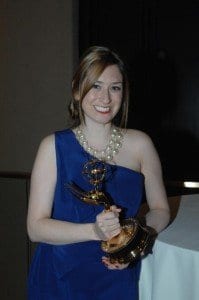 Rebecca Davis was a freshman at the University of Virginia, freshly graduated from George Mason High School, when two planes hit the World Trade Center’s Twin Towers in the terrorist attacks that claimed nearly 3,000 lives on Sept. 11, 2001. Six photographers, who would later become her colleagues at the New York Daily News, were rushing to the scene.

As the director of the newspaper’s video department, Davis created a video project to give those photographers the opportunity to share their 9/11 images and stories. Last month, she received a New York Emmy for her work.

“We Witnessed 9/11 Through Their Lenses” won in a category for historical or cultural programs or specials. Hers was the sole award the New York Daily News took in this year’s New York Emmys, up against stiff competition from dozens of local television networks.

Made to recognize the 10-year anniversary of the attacks, “We Witnessed 9/11 Through Their Lenses” is presented as a page on the New York Daily News website that features videos detailing the experiences of six of the newspaper’s photographers that day.

David Handschuh’s video includes two shots he didn’t take himself: one in which he’s covered in debris and being carried away from Ground Zero by rescue workers, and another in which he’s lying injured on the floor of a deli. Todd Maisel, who helped to save his fellow photographer, talks about the image he captured of a severed hand and how in its anonymity it represented all who died on the planes. Ken Murray’s video shows no images he took that day; his camera was destroyed as the building collapsed around him. His video is an up-close and emotional testimony of how what he saw that day affected him.

Debbie Egan-Chin says she went to a local hospital, expecting thousands of injured victims would be headed there, but only a handful made it. Andrew Savulich describes the camera as a shield that distanced him from the reality of what was going on while he worked. Susan Watts says it was the first time in her life that her instincts to protect herself overpowered the need to get the shot.

In long interviews, Davis talked with each photographer who was out taking photos on 9/11 and was still with the paper. She edited clips from the interviews into six short segments. There is no narrator, just the images and the men and women who captured them.

“They have such a unique perspective on that day because while everyone else was running out and away from the towers, they’ve been trained from their jobs, they have police scanners in their cars, when they hear something they go in the opposite direction of everyone else, straight into what is happening,” Davis said.

Some of the photographers speak openly about their experiences on 9/11, Davis said, and some were revisiting the memories with her for the first time in interview. It was a challenge, Davis said, to bring the photographers to the other side of the camera, and getting them to reflect on themselves as subjects rather than documenters.

“So often we see photographs and we don’t get to hear about the stories behind them, what happened 10 seconds after a photo was taken, or 10 seconds before. I think getting to hear their voices really gave their pictures a new life,” Davis said.

Davis’ background in photography sparked her interest in documenting the photographers’ stories. Her love of the medium was found on trips to Latin America with her father, an anthropologist.

“For me it was a way to be nosy and get into situations I wouldn’t normally find myself in,” Davis said.

At Mason, Davis took her first photography class with John Ballou. She was an International Baccalaureate student, and wrote her thesis on photography. At UVa she studied anthropology, photography, and studio art, and went on to get a master’s degree in photojournalism. Now a senior multimedia producer for “The Today Show,” Davis moved to New York City in 2009 and began work for the New York Daily News.

Davis says that she had felt removed from the attacks while she was a student miles away in Charlottesville, only seeing images and hearing accounts from newscasters. It was in talking to the people who were at Ground Zero, her co-workers who took those photographs, Davis says, that the attacks became more real to her.

In discussing her recent New York Emmy, she gives credit to those subjects.

“Ultimately I was just the one cutting together the work and the stories of the photography staff,” Davis said. “I feel like the award is very much for them, so I was happy to see it get recognition for the work that they had done.”