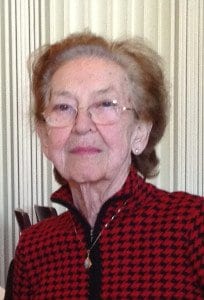 Eleanor Moran (née Wilkerson) died on April 11 after a years-long struggle with cancer and dementia. She was 93 years old.

Eleanor was born in Boydton on July 6, 1919, one of seven children to Addie Sue and Joe Wilkerson. Her father was well known for building homes in Mecklenburg and Halifax counties. She was a 13th-generation descendant of Wahunsonacock (also known as Powhatan, father of Pocahontas). Other contingents of the family (Wilkinsons, Stiths, and Randolphs) arrived much later in 1607.

Around the end of the Great Depression, Eleanor’s family relocated to Georgetown, seeking jobs. She met Fred Moran and they married on March 27, 1943. The couple recently celebrated their 70th wedding anniversary with a family luncheon at The Italian Cafe in Falls Church.

Fred and Eleanor moved to the City of Falls Church in 1953 with their daughter, Sharon Suzanne. Eleanor worked for the Army Corps of Engineers for 30 years as a real estate specialist and computer programmer. She was retired for many years, avidly enjoying her garden and travel.

Eleanor’s energy and wild sense of humor was legendary in her family, and as matriarch she will be sorely missed.